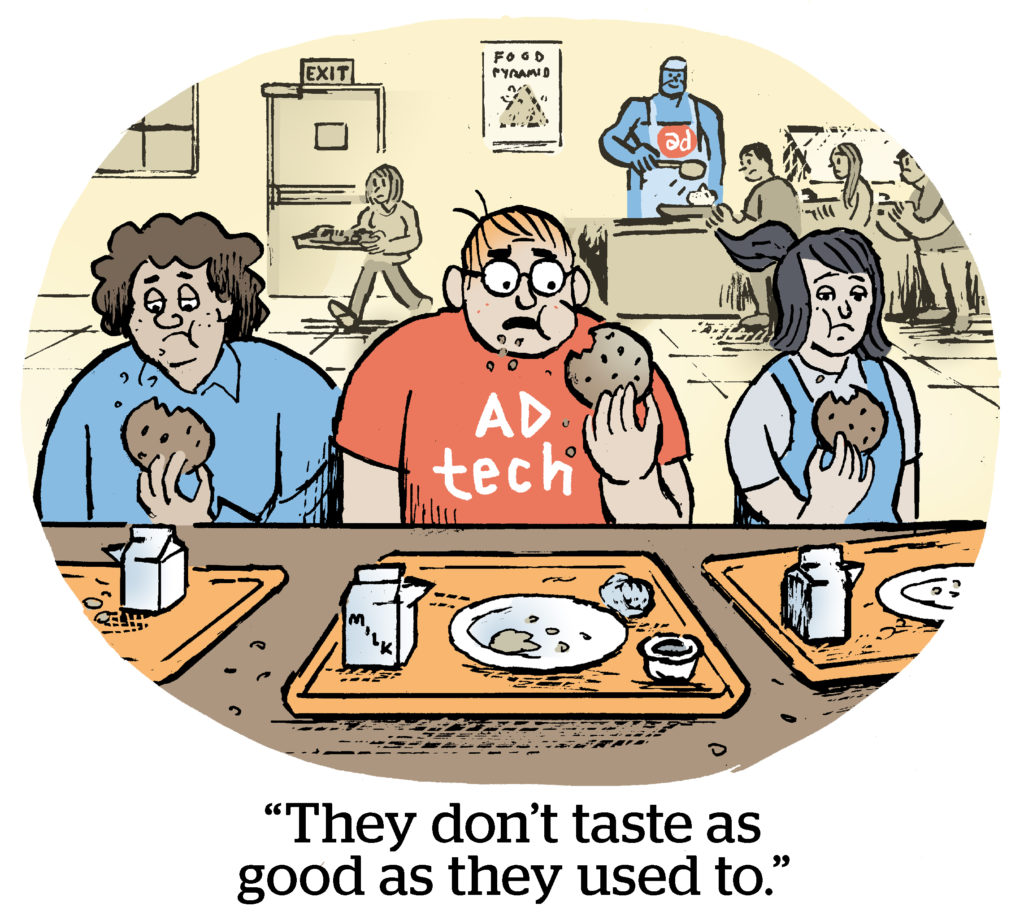 Despite a global pandemic, Google still managed to dominate the top three most trafficked AdExchanger stories in 2020.

In December, Google faced its third government antitrust lawsuit in less than two months, and since the start of the year, readers were keeping eyes on the tech giant when it announced that it would eliminate third-party cookies amid privacy concerns and scrutiny from lawmakers.

Still, readers also visited AdExchanger to hear more about the COVID-19 pandemic’s impact on the industry and how companies transitioned to WFH and revamped their strategies. Here’s a rundown of our most-read stories in 2020.

1. Google, You Finally Really Did It, June 2020. The most trafficked story of 2020 was a column by Ari Paparo, CEO at Beeswax, who initially expressed skepticism on whether or when Google Chrome would finally kill the third-party cookie. “But that day is here, or, I guess, two years from now it will be.” Google announced that third-party cookies would be blocked in Chrome within two years, at which point they will be effectively dead for all use cases. Google also has been clamping down on fingerprinting techniques, which means there’s no secret workaround. “We’ve been operating our digital advertising businesses with a roughly 30% blind spot due to Safari, and that’s now going to 100%,” Paparo wrote. “It is somewhat remarkable that the 30% threshold was not enough to cause major operational changes among buyers and sellers, but now we’re confronting the reality of a world with significantly less measurement and targeting.”

2. Google Chrome Will Drop Third-Party Cookies In 2 Years, January 2020. The year kicked off with the news that third-party cookies – the backbone of programmatic advertising – were not long for this world. It was learned that Google’s Chrome browser would phase them out in two years and was betting that its Privacy Sandbox – the privacy-preserving API first unveiled in August 2019 – would over the next two years build functionality that replaces third-party cookies. Google Chrome proposed to store individual user-level information in the browser, letting outside ad tech companies do an API call to the Privacy Sandbox in order to receive personalization and measurement data without user-level information.

3. Google Opens Its Black Box And Shares Fees Across DV360, Google Ads And Google Ad Manager, June 2020. Google’s tech fees have long been a source of speculation in an ad industry where hidden fees are common. Google attempted to put to rest questions about its fees in a pair of blog posts in June that shared the take rates for its buying portals, Google Ads and Display & Video 360, as well as its publisher tech, Google Ad Manager. It is the first time that Google, under scrutiny from regulators, made the fees public.

4. How Employers Are Taking Care Of Their Workers During COVID-19, March 2020. Advertising and ad tech companies rallied around their employees as their entire workforces moved to remote setups when the pandemic hit. They experimented with #WFH Slack channels, virtual group exercise classes and photo contests for the best work-from-home selfie. Some sick employees were even getting food deliveries on the company’s dime. With people under lockdown, companies tried to keep office culture intact, spirits high, ease mental and financial strain and have a little fun during a time of unprecedented stress for workers.

5. Adobe Exits The Managed Service Business – What Does It All Mean? June 2020. Managed service just wasn’t worth it for Adobe anymore. Adobe said it was phasing out what CEO Shantanu Narayen called “transaction-driven solutions,” or low-margin, “resource-intensive,” largely IO-based network buys within Adobe Advertising Cloud. “These offerings are no longer core to our overall value proposition of delivering customer experience management, nor are they contributing to our subscription-based bookings and revenue,” Narayen told investors during the company’s Q2 earnings call. The move meant that Adobe’s DSP offering, the legacy TubeMogul tech, would be self-serve SaaS all the way.

6. The Dos And Don’ts Of Marketing During A Global Crisis, March 2020. It was COVID-19’s world in March. Consumers – and marketers – were living in the thick of it. The virus had a palpable impact on how consumers shop and consume media and goods, and marketers needed to figure out how to communicate with people in a new way. Or not communicate, as the case may be. “The first thing brands have to do is not think about today, but about how they want their brand to be perceived when the world starts to return to normal,” said Jim Nail, a principal analyst at Forrester. “The last thing you want to do now is appear tone deaf or opportunistic or otherwise taking advantage of the situation in any way.”

7. ROI Vs. ROAS: Which Is The Better Metric For Digital Advertisers? February 2015. Tim Mayer, CMO at Trueffect, wrote a column in 2015 that still resonates today about how the rising costs of advertising and the availability of advanced attribution and offline measurement has begun moving the industry toward more business-focused metrics, such as ROI, and away from ROAS. ROI optimizes to a strategy while ROAS optimizes to a tactic, yet some marketers use these terms interchangeably. ROI measures the profit generated by ads relative to the cost of those ads. It’s a business-centric metric that is most effective at measuring how ads contribute to an organization’s bottom line. In contrast, ROAS measures gross revenue generated for every dollar spent on advertising. It is an advertiser-centric metric that gauges the effectiveness of online advertising campaigns.

8. Mobile Device IDs Will Be The Next Ad Tracker To Bite The Dust, February 2020. Mobile advertising IDs are probably not long for this world. Neither Apple nor Google – which is fresh off announcing its plan to kill third-party cookies in Chrome less than two years from now – has taken concrete steps to eliminate their respective device IDs as of yet, but the app ecosystem should be preparing for that eventuality. Even Facebook seems worried. It’s likely that Apple’s IDFA will be the first shoe to drop, with Google following Apple’s lead.

9. Which COVID-19-Related Consumer Behavior Shifts Are Here To Stay? March 2020. While the coronavirus-induced toilet paper panic buying was, thankfully, only a flash in the pan, the pandemic created more permanent behavior changes in the way people shop, consume media and how they regard the brands they do business with. Some obvious behavior pattern shifts – an increase in streaming, the uptick in ecommerce and a gravitation toward online food delivery – were accelerating long before the novel coronavirus even existed. Even spending more time at home, which is now being officially enforced at different levels across the country, was already on the rise in the form of “spiritual cocooning.”

10. Amazon Removes Third-Party Vendors From Its Affiliate Program, April 2020. Amazon announced that it had removed third-party vendors from its affiliate program. Starting at the beginning of April affiliate networks such as Skimlinks and Sovrn (which acquired VigLink) could no longer send traffic to Amazon and get a cut of transactions. Removing third-party affiliate networks frees up significant profit margins for Amazon and, potentially, for publishers that traffic sales directly to Amazon. But affiliate networks didn’t just get a cut of the single item they linked to, they got their commission for any products added to the cart within 24 hours of the original item. While Amazon could have limited affiliate commissions to only products added to a cart, instead of removing third-party vendors, the policy change was seen as a kind of supply-path optimization.