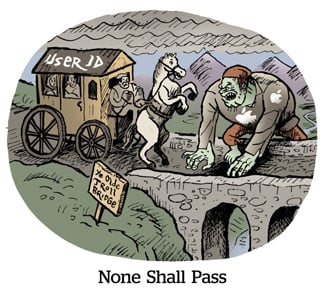 Mobile advertising IDs are probably not long for this world.

Neither Apple nor Google – which is fresh off announcing its plan to kill third-party cookies in Chrome less than two years from now – has taken concrete steps to eliminate their respective device IDs as of yet, but the app ecosystem should be preparing for that eventuality.

Even Facebook seems worried. Facebook CFO Dave Wehner recently cited “product changes and future plans” coming from mobile operating systems and browser providers, such as Apple and Google, as a likely contributor to ad targeting-related headwinds in the year to come.

It’s likely that Apple’s IDFA will be the first shoe to drop, with Google following Apple’s lead. The same thing happened after Apple replaced its unique device identifier, or UDID, with the IDFA in 2012 in an attempt to curb persistent tracking. Google followed suit in 2013 with the release of an advertising ID for Android, a replacement for its unique Android ID.

But device IDs have proven not to be the privacy-preserving solutions they were meant to be, and now it’s time for another change.

“Whenever an app or ad tech company does something stupid, that gets thrown in the App Store or Google Play’s face,” said Ana Milicevic, principal and co-founder of Sparrow Advisers. “Apple and Google need to police their own backyards.”

Apple, in particular, is living in a moral limbo. Its stance on Safari, where third-party cookies are blocked by default, is inconsistent with the sort of tracking it enables in the app ecosystem with the IDFA.

While industry observers certainly expect Apple to remove the IDFA, it’s unclear when.

Predictions tallied from a straw poll of industry pundits conducted by AdExchanger put the time frame for some kind of action somewhere between six months from now and five years. But nearly all agree that change is in the air.

But for Apple and Google to yank their respective device IDs without warning or viable alternatives would make their app ecosystems an inhospitable place for developers who need to monetize their creations, said Mike Brooks, SVP of revenue at weather app WeatherBug.

Some cling to that argument in the hope that Apple and Google won’t take extreme action. But that doesn’t mean nothing is going to happen.

Google and Apple know “they can’t run roughshod here,” Brooks said, but they also know that “they need to do something.”

Since Apple will probably be first, let’s look at some of the alternatives. 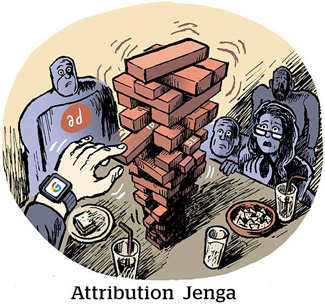 Apple might have left a clue about what a world without the IDFA could look like in SKAdNetwork, an API for iOS 11.3 and higher, which Apple released with zero fan fair in May 2018.

The API, which has had almost no adoption thus far, would allow ad buyers and ad networks to attribute installs from the App Store without having to use an attribution vendor. This would essentially sideline the third-party app measurement vendorscape and restrict user-level attribution in the app ecosystem.

But if Apple eliminated its identifier in favor of the SKAdNetwork, it might start an arms race where companies try to build tracking workarounds, such as fingerprinting, said Gadi Eliashiv, CEO and co-founder of attribution company Singular, which created a cross-industry coalition of marketers, publishers, ad networks and measurement companies last year to try and hammer out a survival plan for a post-IDFA world.

Although SKAdNetwork might seem like a dormant technology now, there’s no reason it couldn’t play a bigger role in the future, said Ratko Vidakovic, founder of ad tech consultancy AdProfs. At the very least it provides a “glimpse into Apple’s thinking,” he said.

There’s always rationale behind why Apple does what it does, even if it’s not always clear at the time, said Eric Seufert, a media strategist, former Rovio exec and editor of Mobile Dev Memo.

“SKAdNetwork could be foreshadowing something,” Seufert said. “MMPs [mobile measurement partners] don’t have to wait to see the writing on the wall here, they just need to look at the SDK docs.”

With SKAdNetwork, buyers would lose the granularity they’re used to in their measurement, but at least they’d know that the data they get back is accurate and fraud-free, because it would be coming directly from their ad network via an Apple API.

Buyers would also be able to cut out an expensive middleman. Attribution technology can cost around $100,000 a month for a high volume of ad spend, Seufert said.

“What a rat’s nest of weird workarounds that go on just to stamp someone with a UTM source – so, why not let Apple step in and tag the source where people click? That’s really enough,” he said. “The App Store has been around for 10 years; it’s time for Apple to accept the reality, take a cut and stop creating friction for developers by making them use an MMP.”

The SKAdNetwork API could even be one of many privacy-focused APIs to come.

Maybe the app ecosystem is in store for a Privacy Sandbox-like setup stocked with proposed alternatives for the IDFA.

It’s far more likely, Vidakovic said, than Apple replacing the IDFA with a different but analogous identifier, such as the IDFV, an identifier specifically associated with vendors in the iOS ecosystem. Some industry optimists have floated IDFV as a possible alternative to IDFA.

But don’t expect a business-as-usual replacement for the IDFA in Apple’s ecosystem or for an IDFA-like identifier to replace cookies in the browser, as some have suggested.

“We’re not going to simply see one user-level identifier swapped for another,” Vidakovic said. “We’re moving into a world where tracking is not user based, both on the web and, most likely, in apps, and any long-term solution is going to have to be privacy by design.”

Apple did not respond to a request for comment.