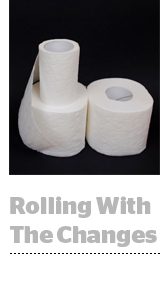 How do all these changes affect marketers, and how should they adapt their messaging and media strategies to the COVID crisis? Click here to find out.

Once the coronavirus-induced toilet paper panic buying dies down, consumers will probably chill on their TP sprees.

But COVID-19 has the potential to create more permanent behavior changes in the way people shop, consume media and how they regard the brands they do business with.

“The real question here, and what’s most interesting and hard to say, is what happens when this is all over,” said Jim Nail, a principal analyst at Forrester, who’s doing his WFH thing in Boston. “Will people revert back once they’re able to return to their normal routines?”

Some obvious behavior pattern shifts – an increase in streaming, the uptick in ecommerce and a gravitation toward online food delivery – were accelerating long before the novel coronavirus even existed.

Even spending more time at home, which is now being officially enforced at different levels across the country, was already on the rise in the form of “spiritual cocooning,” especially over the last four years, said Kate Muhl, an analyst at Gartner.

“[It’s] the attitudinal equivalent of old-school cocooning where, in the face of economic uncertainty, people focus their social lives at home – only with spiritual cocooning, we’ve been looking at an emotional pullback, a reaction to the cultural tensions and polarization that have come to define the American experience,” Muhl said.

“Everything happening right now,” she said, “only serves to amplify underlying cultural conditions and make literal – hunkering down at home – what’s been happening figuratively for years.”

Case in point, the coronavirus is triggering a massive change in the way movies are released, which could have a lasting effect on how people consume Hollywood entertainment.

In the face of movie theater closings this week, multiple studios said that they’ll be making their first-run films available for home release, including “Trolls World Tour,” “The Hunt” and “Emma,” all of which will be available to watch on demand the same day they’re scheduled for theatrical release.

“Distributing content direct-to-consumer without a theatrical window is something the film industry has wanted to do for a long time,” said Brian Wieser, global president of business intelligence at GroupM. “And it cannot be understated how large an impact this could have on social norms and on the way people see movies.”

How much of an impact, however, will only become clear in the months to come. And it’s not as if the notion of going out is going to disappear, once it’s safe to do so again.

“Just look at the post-SARS environment in Asia,” Wieser said.

Despite conspicuous growth in media consumption – according to Nielsen, staying home can lead to an almost 60% increase in the amount of content people watch, while video SSP SpotX clocked a 16% increase in video ad inventory across its global marketplace since COVID-19 took hold – Forrester’s Nail expects the spike to level out when the crisis does.

Consumer behavior changes to do with convenience are one thing, but “we may see the opposite with something like the movies,” Nail said.

“I’m sure Netflix is seeing a huge spike and will continue to for weeks or months, “ he said. “But I suspect there’s going to be a pent up desire to get the hell out of the house.”

The wider embrace of ecommerce, though, could be one of the clearest examples of a behavior shift that’s here to stay.

“Although ecommerce was reasonably widely used before, it was not universal for everything and everyone,” Wieser said. “But now where you can use it you will, and it might become more of a default way to shop for some product categories; once a new habit like that starts, it might not shift.”

China, which is gradually returning to a semblance of normality after being hit first and hardest by the outbreak, can serve as a crystal ball of sorts for what might play out in other markets.

Although the data coming out of China points to a 20% drop in commerce-related activity for the months of January and February, ecommerce was actually up 3%, Wieser said.

Of course, you’ve got to take that with a grain of salt (if you’re still able to find any on the shelves that is).

Earlier this week, eMarketer took a machete to its China ad spend forecast, forecasting a downturn in its annual media spend projections from 10.5% growth (to $121 billion) down to 8.4% growth (to $113 billion). That’s the slowest growth rate since eMarketer started tracking ad spend in China in 2011.