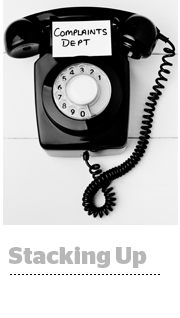 Regulators around the world are now paying attention.

In some cases, companies proactively proffer their grievances, while in others, regulators solicit their feedback as evidence gathering in newly launched antitrust investigations.

Here’s a sampling of companies with an axe to grind against big tech.

Since 2009, FreeWheel, Comcast’s video advertising division, had a direct pipe into YouTube supply, which allowed its media company clients to sell ads next to their content on the platform.

In September, FreeWheel reportedly told a congressional task force about Google’s moves, alleging that Google is using privacy as an excuse to shut out competitors.

In a statement, Comcast said it would “embrace” a solution that allowed FreeWheel to still meaningfully serve its clients when they publish content to YouTube. “Unfortunately,” the Comcast rep stated, “the actions to remove or degrade FreeWheel’s capabilities on YouTube fall well short of that.”

(AppNexus founder and former CEO Brian O’Kelley had similar complaints against Google for pulling YouTube inventory out of AdEx in 2015 as a way to force buyers onto the DoubleClick Bid Manager.)

There’s no love lost between Oracle and Google, which have been battling in court for around a decade over the copyright for Java APIs. Google used the APIs to build its Android application ecosystem. Oracle long claimed that the APIs for Java software, which Oracle developed, constitute intellectual property. Oracle eventually won its case and Google recently failed in an effort to get the Supreme Court to review it on appeal.

Now, Oracle has the opportunity to clap back in another arena. The company confirmed in September that the House Judiciary Committee and Texas Attorney General Ken Paxton – Texas is leading up a collective state antitrust investigation into Google – have both reached out to Oracle for information on how the company has been harmed by tech giants.

Ken Glueck, an Oracle EVP, told Reuters that Oracle has also met with the Department of Justice.

Meanwhile in France, Criteo filed an antitrust complaint against Facebook with the French Competition Authority on Sept. 10.

According to a release Criteo issued about its complaint, “the gradual exclusion of companies from the Facebook platform has adversely impacted the diversity of the online advertising industry.”

Criteo says it’s hoping to create a more level playing field for the industry by restoring the ability for companies to access the Facebook platform on “fair terms,” and to establish “clear and transparent” guidelines to prevent Facebook from unfairly favoring its own services at the expense of its competitors.

Criteo shares tanked after it was revealed that Facebook had removed the retargeting company from its marketing partner program in September 2018.

It became almost funny how many times Facebook seems to have copied features from Snap (well, maybe not so funny for Snap’s engineers.)

There’s the Stories ad format, which Snap originated, filters, face swaps, stickers and scannable QR codes for profiles in Messenger. Facebook is reportedly even working on developing a pair of smart glasses.

Although Snap’s stock rebounded this year, the company would suffer on the public market every time Facebook or Instagram swiped a feature. It’s still happening. On Thursday, the stock dipped after Facebook announced Threads, a very Snapchat-like app for Instagram users.

The Federal Trade Commission asked Snap for access to its Project Voldemort files as part of the agency’s nascent antitrust investigation into Facebook.

In March, Spotify filed a complaint against Apple with the European Commission over anticompetitive behavior, including what it calls the “Apple tax,” aka, Apple charging fees as high as 30% for accepting in-app payments. Apple Music is a direct competitor to Spotify, which for its part created an entire website dedicated to examples of Apple’s alleged anticompetitive sins.

US news publishers are joining forces to lobby against Google and Facebook in DC.

Senior execs from top papers, including The Los Angeles Times, News Corp, San Diego Union-Tribune and Gannett, met with lawmakers in September to support a four-year antitrust safe harbor bill that would allow publishers to band together to compete and negotiate better rates with the large internet platforms.

The News Media Alliance, a trade association representing newspapers across the United States and Canada, prepared a study in advance of a House antitrust subcommittee meeting focused on the relationship between tech platforms and media, which found that Google made $4.7 billion in news industry-related revenue last year – almost as much at the $5.1 billion US news pubs made collectively from ads during the same time period.

In a similar vein, the Retail Industry Leaders Association, which includes Walmart, The Home Depot, Best Buy and Lowe’s, is keen to share information with the DOJ and the FTC about anticompetitive behavior on the part of Amazon and Google.

The group has already spoken with the House Judiciary’s antitrust subcommittee and penned a letter to the FTC in July, contending that large tech platforms create an “information bottleneck” with the power to alter market conditions.

Unlockd, a now-defunct Australian startup that used to serve ads onto smartphone home screens in exchange for rewards and personal data, declared bankruptcy last year and closed its doors.

Why? The company claims Google destroyed its business after blocking it from Google Play and the AdMob ad network. The company’s founder, Matt Berriman, is now trying to raise money to bring an antitrust case against Google in a US court.

Review forum and local business search company Yelp has been complaining about Google throwing its weight around for years. Yelp has accused Google of scraping its content and serving up Google ads in search rather than the Yelp review a person was actually looking for.

It hasn’t been reported that Yelp is providing information to regulators, but it’s hard to imagine the company won’t since it’s been so vocal in the past about feeling stymied by Google.