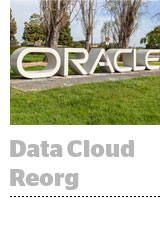 Assembled from acquisitions totaling in the multibillions, Oracle Data Cloud (ODC) had become inefficient, too focused on its declining business selling third-party data. Now, the embattled unit is trying to streamline.

ODC cut 10% to 15% of its staff Monday, multiple sources told AdExchanger, after which it will focus on contextual data, brand safety and measurement.

ODC sees those businesses as its strategic future because they present better growth opportunities and stronger margins than its third-party data business, which was once seen as its core.

While third-party data is still the biggest contributor to topline revenue, its growth has slowed and it will be the cash cow that funds ODC’s investments in smaller, faster-growing categories.

“As our cloud business grows, we will continually balance our resources and restructure our team to help ensure we have the right people delivering the best products to our customers around the world,” an Oracle spokesperson said in a statement provided to AdExchanger.

Tarkoff, along with ODC CRO Mollie Spilman, who joined from Criteo in June, made the layoffs as part of a reorganization to re-focus the data unit, and to reduce the bloat that came from numerous acquisitions operating as stand-alone businesses.

A business in decline

Because of the strategic focus on contextual and measurement, teams centered on use of third-party data were hardest hit by the layoffs.

ODC’s organization structure had been ill-equipped to weather the darkening forecast for third-party data.

The tough work of integrating ODC’s many acquisitions – BlueKai, Datalogix, Moat, AddThis and Grapeshot – wasn’t done by senior leaders, multiple sources said. Instead, too many people worked without contributing to the growth or revenue of the business.  For example, commissions were paid out to three or four teams, muddying who contributed what to overall revenue.

Last year, ODC realized it was overpaying for some of its third-party data, and cut contracts with some data providers it used to compose data segments.

But it also had trouble selling its third-party data, as it faced stiffening competition from IRI, LiveRamp, Eyeota and PushSpring.

Oracle had also soured on third-party data because of privacy concerns. Oracle shut down its AddThis business in Europe after GDPR went into effect.

ODC is exercising that caution already by shutting down certain segments. In November, it will discontinue alcohol-based targeting. Via Datalogix, companies could target people who frequently bought alcohol – which felt too close to enabling alcoholics.

But ODC had been taking revenue hits due to privacy concerns since last year, when Facebook shut down third-party data providers on its platform. Already flailing, that decision lowered company morale further. As use of third-party data becomes more regulated by lawmakers and policed by browsers, it has become a risky business to invest in.

With this latest round of layoffs complete, it’s now up to Spilman and Tarkoff to see if they can set the company on a new path to growth and lift morale in the process.