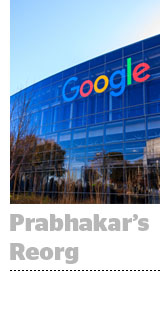 As part of the reorg, he’s re-visualizing the company as four “concentric circles.” The innermost circle is Google’s owned-and-operated properties, including search and YouTube. The next circle outside of that is Google’s buy-side and sell-side businesses. The two outermost circles span the organization: measurement and privacy.

As part of the change, Raghavan created two new roles: a head of measurement, Vidhya Srinivasan, and a head of privacy, Mike Schulman.

Raghavan stepped into the ads role last October, so he took his time before making organizational changes, which started rolling out last month.

The addition of measurement and privacy heads, in particular, speaks to how Google sees those areas of strategic importance. Google CEO Sundar Pichai has talked about how he wants products to be engineered to minimize the use of data, for example – a goal a privacy-focused team could accelerate.

Plus, having a head of privacy doesn’t hurt as the company faces growing pressures to show consumers and regulators that it respects users’ privacy.

Raghavan also made significant changes to the leadership of Google’s buy-side and sell-side businesses, reducing the scope of Brad Bender, the former head of those divisions.

Bender, a widely respected leader who spent 10 years at DoubleClick and more than a decade at Google, is stepping into a strategic adviser role and will report directly to Raghavan.

Now there will be two separate heads, one for the buy side and one for the sell side – a slight separation of the two pieces of the business.

Jerry Dischler is stepping into the buy-side chief role.

Sissie Hsiao, who previously ran the AdMob business, is now running all three sell-side businesses, with an eye toward unifying the AdMob, Google Ad Manager and AdSense businesses.

Jason Bigler, the recently appointed head of Google Ad Manager, is departing, moving to a fin tech after a long run at both DoubleClick and Google. He will lead product management and engineering strategy for Two Sigma, a company that uses AI and machine learning to trade stocks. Its largest line of business is a hedge fund.

Google faces four antitrust investigations – from the House Judiciary Committee, state attorneys general and two from the US Justice Department. It received a $1.7 billion fine in March from the European Union for violating antitrust rules.

Although the entire ads business is undergoing a reorganization, Google’s network business – where Google-powered ads appear on non-Google-owned sites – may have been particularly ripe for such change.

Previously, Google had multiple sell-side businesses for display, apps and AdSense. But because clients use many of those products simultaneously, it made sense for Google to unite them all under one business unit.

On the buy side, Google has already unified the backend of its two platforms – a project led by Bender.

Google’s network business is in the strange position of being powerful externally but disempowered internally. Externally, it faces complaints from competitors who see it dominating the market – which Hsiao recently denied in a blog post.

But internally, its overall revenue importance has slowly diminished. Back in 2010, the network business comprised 30% of Google’s revenue. In the latest earnings, it was just 14% of its revenue – and that’s before it paid out 70% of that revenue to its partners.

The slower-growing business just simply hasn’t matched the double-digit growth of search and YouTube – just one of the factors Raghavan likely weighed as he set up the new organization.