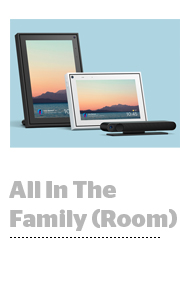 While you chill on the sofa trying to figure out what to watch next, there’s a war raging for your attention, and Facebook is the most recent combatant.

(Facebook also rolled out an 8-inch Portal Mini and redesigned 10-inch Portal, both of which are stand-alone devices for video calling and video watching.)

Considering the proliferation of CTV streaming devices, Facebook is making a belated entry. Not to mention one other built-in feature (or bug) of anything Facebook touches these days: privacy concerns and inherent trust issues.

Is it too late for Facebook to get into the living room, and what are the potential opportunities for Facebook from a data and monetization perspective if they can pull it off?

AdExchanger checked in with the experts.

There’s already a saturation of connected TV devices, Google Homes, Alexa devices, Smart TVs, iPhones, iPads. These devices have already made their way into the living room as well. We don’t believe that Facebook’s portal has enough of a differentiator to be additive to a home’s current digital ecosystem. High-quality video calling with WhatsApp is an interesting selling point, however, that video calling functionality can be currently found in many other devices – including Smart TVs.

In terms of monetization, that would fall in the current categories where Facebook is already serving ads: within Facebook Watch and eventually WhatsApp. With Facebook’s current climate and general privacy issues, we think anything extremely intrusive added to Portal apps would be a miss.

I wouldn’t count any cash-rich organization out at this point. My concern is that their efforts so far have lacked real muscle behind them. Their prior CTV program seemed largely unknown to most Facebook employees, let alone the market.

Technically, Facebook is already in the living room, people are scrolling their feeds during programming on their mobile devices. But to get on the bigger screen in the living room, they need to bring big-screen level content, not quick recipe videos. And because they are later to the market, the content can’t just be “me too,” but truly disruptive. That’s where the cash comes in. From a data perspective, it could be incredibly powerful – an authenticated logged-in user absorbing distinct forms of media from multiple devices. But they have to truly invest, not only financially, but also with real strategic commitment.

Ten years ago, people would have said the battle for TV is over and the only way in was through a massive investment in premium content. While that’s still somewhat true, Roku just proved the living room is very much up for grabs.

One could argue Facebook started winning the living room, kitchen, bathroom, bus stop a decade ago. From a TV perspective I would expect they follow the same model that got them into photo sharing (Instagram) and messaging (WhatsApp), and that is to acquire their way in and integrate from there. Portal gives them enough critical mass to test different models in user behavior before they decide to make that kind of investment. If they pull it off they have true cross-screen video selling and addressable advertising at scale.

The living room is a lean-back environment and the Facebook Portal is fundamentally a lean forward social activity. To win the living room you must have insights into the TV viewing behaviors which Facebook does not collect.

Only a handful of companies such as Netflix, Amazon and the smart TV manufacturers are in a position to dominate the living room because they have massive TV viewing data moats. To win the living room you have to know what people are watching and be able to predict what content people want to watch, not what they are talking about.