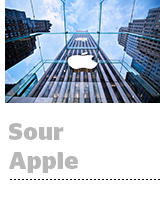 Although maybe not as exciting as the upcoming Mike Tyson fight against Roy Jones Jr., Apple and Facebook have been trading blows this week over which one of them exploits their users more. Business Insider reports that Apple landed the first blow on Thursday, accusing Facebook of collecting “as much data as possible” while showing a “disregard for user privacy.” Facebook shot back saying Apple is abusing its dominance to “self-preference” its own data collection. Apple’s comments came as part of a response to a letter sent by pro-privacy nonprofits objecting to Apple’s decision to delay the rollout of its IDFA changes, which will require developers to get an explicit opt in on ad tracking, until early next year. The feature was supposed to go live with the release of iOS 14 in September, but Apple extended the deadline to give developers, including Facebook, more time to adapt after they complained that it would gut their advertising revenues.

Meanwhile, state and federal investigators are preparing to bring antitrust charges against Facebook that are expected to challenge the tech giant’s past acquisition of two rivals, Instagram and WhatsApp, alleging that the deals helped create an anticompetitive social networking juggernaut that left users with few quality alternatives. Charges along these lines would saddle Facebook with the toughest regulatory challenge in its nearly 17-year history, The Washington Post reports. In addition to poking Facebook’s previous acquisition, investigators are also eyeing the way in which it managed its vast troves of user data, as well as the policies it has in place that govern when and how third-party app developers and other companies can access it. It’s not hard to read between the lines. Expect an argument from investigators contending that Facebook weaponized its most valuable asset – data – as a way to stamp out emerging rivals. Facebook, for its part, has lobbied hard against these claims. Mark Zuckerberg has stressed to lawmakers that his company’s purchase of Instagram, WhatsApp and other startups did not threaten competition, but rather allowed those services to flourish worldwide.

CTV is a shiny new object, but that doesn’t mean it’s not just as vulnerable to the same thorny issues that have plagued display. Zefr, a contextual targeting software platform for YouTube, is trying to help CTV avoid those perennial pitfalls by partnering with Iris.TV, a contextual marketplace for the sell side. Together, Adweek reports, the duo will help bring brand safety and suitability tools to CTV and online video. Marketers will be able to use Zefr’s contextual targeting tools to buy ads in specific shows from media owners that work with Iris.TV. “We tap experts in the industry like Zefr … to categorize all that content that we have at our fingertips through the publishers, and then send that data out into the ecosystem,” said Richie Hyden, co-founder and COO of Iris.TV. Advertiser concerns over adjacency have reached a fever pitch this year as the newscycle grew ever more controversial. In particular, media buyers are worried about UGC, with some pulling spend from Facebook and YouTube over hate speech and other objectionable content. But even reputable news sources have suffered as sensitive marketers keyword blocked content related to the coronavirus or protests. This has prompted accusations that brand safety vendors take too blunt of an approach rather than considering the specific context of a given piece of content. [Related in AdExchanger: “DoubleVerify Develops A More Nuanced Tool To Gauge Brand Suitability.”]