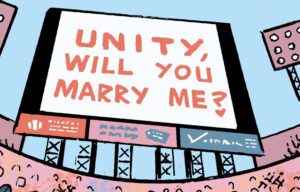 Mobile
Unity Rejects AppLovin’s Bid And Sticks With IronSource
Analytics
Umami Offers A New Flavor Of Non-Google Analytics
Vizio
Vizio’s Bet On Advertising And Data Is Paying Off At Last
attribution
Losing Faith In Walled Gardens, Brands Test New Analytics
Investment
What The End Of Days For Ad Tech Might Look Like

Marketers today have many data sources available to them, giving them the option to tailor data sets based on their specific needs. Whether it’s for audience segmentation or business operations, it can be tempting to buy the biggest data set available. However, it’s important that marketers think twice before diving in, especially when it comes to location data.

Large location data sets often include raw data that has not been normalized or verified, leading to potential integrity issues.

As such, it’s essential that marketers look for two key components before selecting a data set: data normalization and quality assurance. END_OF_DOCUMENT_TOKEN_TO_BE_REPLACED 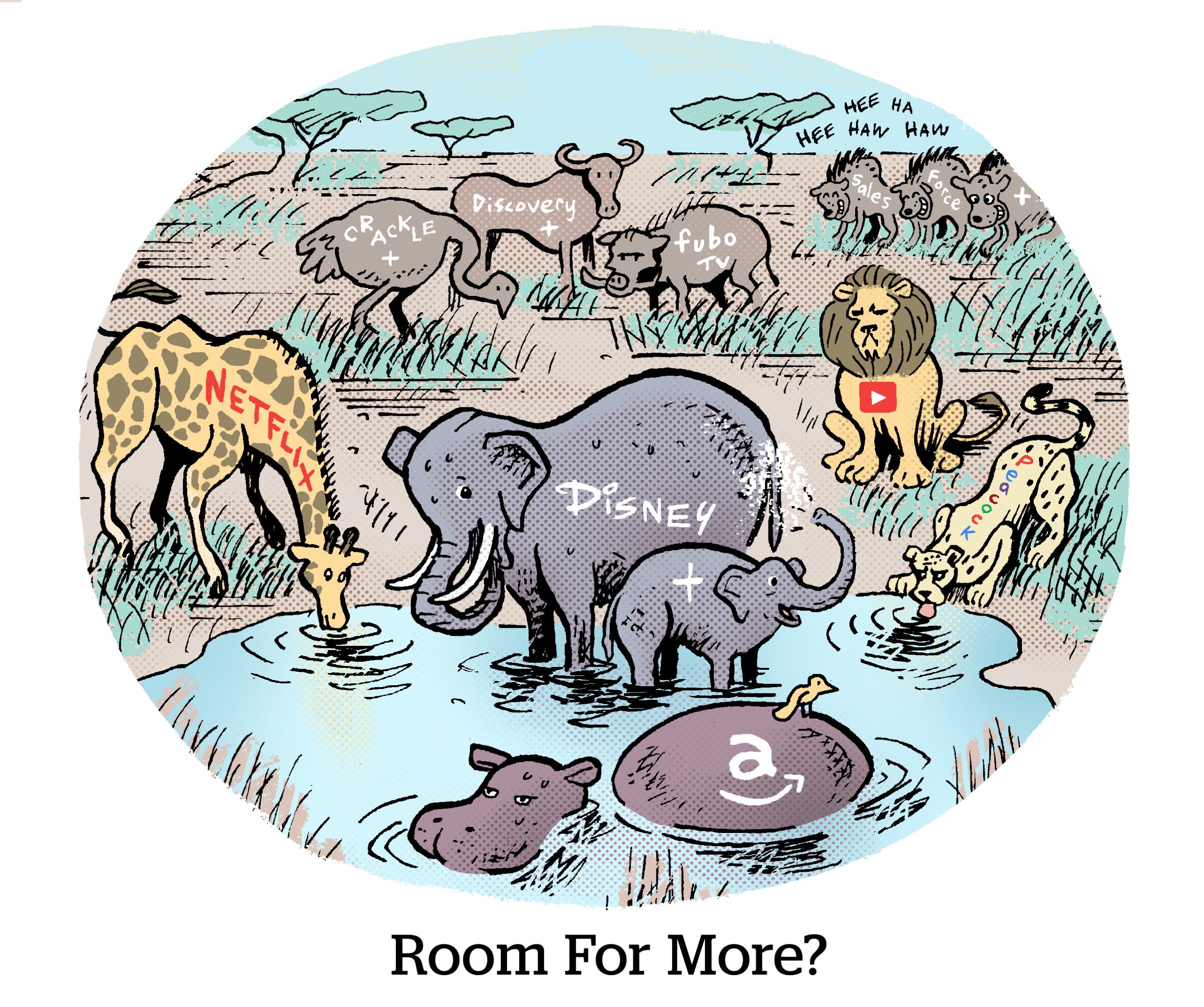 Did you know Chicken Soup for the Soul has a streaming service?

Well, it does, and now it also owns Redbox – it paid $375 million for the 20-year-old movie rental kiosk and closed the deal Thursday, the same day it announced its quarterly earnings.

Chicken Soup reported 70% year-over-year revenue growth for the quarter. Shares were down following the Redbox announcement, but they’d been trending upward for months.

The rise of movie streaming may have put Redbox’s competitor Blockbuster out of business, but transactional video-on-demand (TVOD, because we need yet another acronym) isn’t as outdated as it used to be. For example, you don’t actually have to get the movies from a physical location (you can just rent them online), so Redbox brings a scalable audience and 11,000 titles to Chicken Soup.

Redbox also has a customer loyalty program with more than 40 million members – which is a lot of first-party data that can be used for retargeting across the company’s streaming offerings. Oh, and maybe even a way to try and grab the attention of advertisers as they stampede for Netflix and Disney+ inventory. END_OF_DOCUMENT_TOKEN_TO_BE_REPLACED 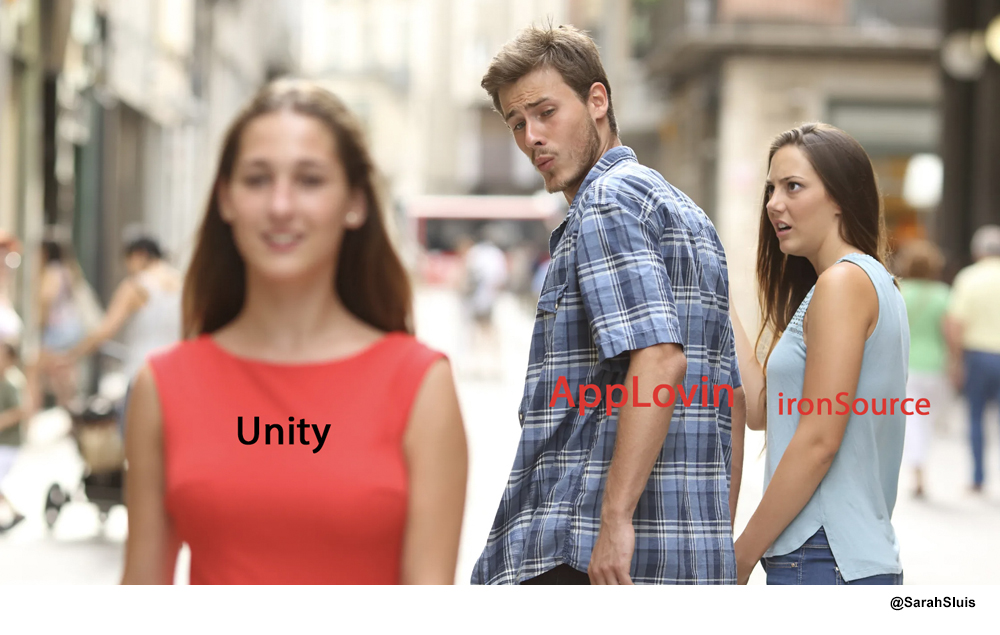 AppLovin wants to marry Unity. Unity just got engaged to ironSource. IronSource is still waiting at the restaurant with flowers. But Unity hasn’t quite made up its mind yet.

And now you’re up to date, in case you weren’t following this week’s drama.

If Unity does decide to pull out of its planned $4.4 billion merger with ironSource and accept AppLovin’s $20 billion all-stock offer, the combined AppLovin/Unity would take Unity’s name. Unity CEO John Riccitiello would become CEO of the whole shebang and AppLovin’s CEO, Adam Foroughi, would be the COO.

Riccitiello declined to comment on AppLovin’s proposal during Unity’s Q2 earnings on Wednesday.

It’s hard to compete against Google.

But Google is under pressure around the world – and anytime a regulator starts investigating Google in a given market, The Trade Desk claims to see an uptick in agency business.

The Trade Desk is particularly bullish on growth in connected TV, a rare market that Google doesn’t overwhelmingly dominate.

But The Trade Desk has always been careful not to cast itself as Google’s victim. During The Trade Desk’s Q2 earnings call this week, CEO Jeff Green told investors he’s “concerned about what Google has done” to make it hard for smaller companies to compete on the open web.

On this week’s episode, we get into Green’s deep ties with Microsoft. (He worked there between 2007 and 2009 after AdECN – the DSP he founded before The Trade Desk – was acquired by Microsoft.) We also dissect why The Trade Desk is so pleased that Microsoft (and not Google) will be the gatekeeper for Netflix’s ad supply.

And the team talks about the ongoing tension with Google – which has been brewing for a lot longer than just this quarter. END_OF_DOCUMENT_TOKEN_TO_BE_REPLACED

Late campaigns are nothing new. Still, few preventative measures are being taken. One possible reason? The consequences aren’t always clear. It’s time to shine a light on exactly what happens when someone misses a deadline – and why it’s so risky.  END_OF_DOCUMENT_TOKEN_TO_BE_REPLACED 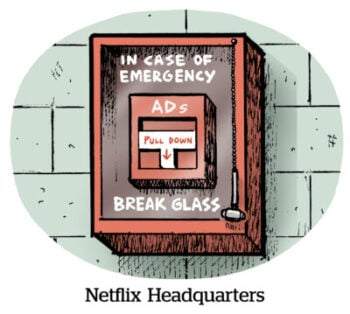 Gaming on Netflix isn’t taking off. That’s hardly surprising – you may very well not even have known Netflix has gaming. And that’s a problem for Netflix, which is looking to increase its subscriber base (or at least keep existing subscribers actively engaged) without spending boatloads to make new content.

Netflix has acquired three mobile game studios over the past year in an effort to broaden its entertainment offering. But Netflix Games, which launched last November, only has 1.7 million daily users, as in less than 1% of Netflix’s total subscriber base.

Why? Well, for one, not that many of its subscribers care, Android Central reports, and Netflix isn’t actually spending all that much to bring its gaming vision to life. The company spends more on one big-budget movie than it did to buy all three of the game studios it now owns.

On the other hand, advertising is newly front-and-center for Netflix, which could slash prices as a way to attract and keep subscribers and use ads to make up for any lost revenue (and hopefully boost revenue, too). AVOD is one way to avoid having to justify hiking prices or trying to force gaming on people in a possibly misguided attempt to increase the value of a Netflix subscription.

Even so, Netflix plans to double the size of its game library from 24 games to 50 by the end of the year. Anything to try and reduce subscriber churn. END_OF_DOCUMENT_TOKEN_TO_BE_REPLACED 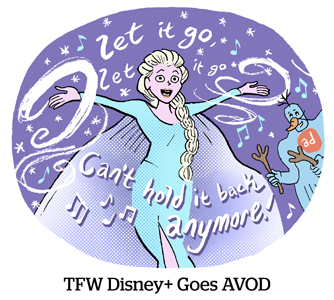 The service is adding an ad-supported tier in just four months, with a US launch date of December 8.

Disney+ AVOD will be available for $7.99 a month, the same price as Hulu’s Basic plan, and the current price of Disney+ with no ads. Meaning Disney will hike the price $3 a month for viewers who want to continue avoiding ads.

“We launched all our streaming offerings at an extraordinarily compelling price, and since the initial launch [of Disney+], we’ve invested handsomely in our content,” Disney CEO Bob Chapek said on the conference call, in defense of the price hike. “We don’t believe there’ll be any meaningful impact on subscriber churn.”

Disney exceeded expectations on subscriber count for the quarter, adding 14.4 new Disney+ accounts and bringing Disney’s total subscription base to 221 million users across its streaming offerings (which includes the Hulu and ESPN+ bundle). Overall, Disney reported $21.5 billion in revenue for its third quarter on Wednesday, which is up 26% year-over-year. END_OF_DOCUMENT_TOKEN_TO_BE_REPLACED