Twitter really wants a piece of the performance advertising pie.

On Tuesday, Twitter said it has acquired interactive mobile ad company CrossInstall. No deal price was disclosed. All of CrossInstall’s 70 employees will be joining Twitter.

CrossInstall is a mobile-only DSP focused on user acquisition with its own home-grown bidder and proprietary creative offering, including playables and other interactive ad units. The company was founded in 2012 and never raised any outside funding.

🚨🚨🚨Excited to share some GOOD news. Today we reached a deal for @crossinstall to join the Twitter family 👋

Most of CrossInstall’s clients are gaming companies, such as Machine Zone, Jam City, SGN and PuzzleSocial.

Performance advertising, courtesy of gaming in particular, has proven resilient during the coronavirus crisis. Facebook, Google and Snap were all buoyed by direct response dollars in the first quarter, while Twitter’s DR business faltered.

Twitter has been gunning for more performance ad dollars for the last couple of years with mixed success. It plans to tap into CrossInstall’s expertise in performance advertising and user acquisition strategies to “help accelerate our advertising product road map in 2020 and beyond,” Bruce Falck, Twitter general manager of revenue product, tweeted Tuesday morning.

“We also believe this acquisition will further increase MoPub’s value to mobile app developers, another critical part of our business,” he tweeted. 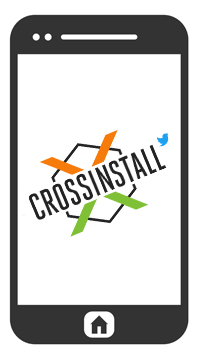 On the company’s Q1 earnings call in late April, CFO Ned Segal noted that developing revenue products is Twitter’s “No. 1 priority,” including its mobile app promotion (MAP) product, which is currently being piloted by a handful of advertisers.

Twitter is also in the midst of rebuilding its ad server. The hope is that the ad server, combined with Twitter’s MAP and other DR-focused efforts will buoy MoPub’s growth.

“Together, we’ll be working to expand Twitter’s reach into all areas of app install and performance advertising while increasing the value that MoPub offers to mobile app developers,” CrossInstall wrote in a blog post about the acquisition.

For now, CrossInstall will operate as a stand-alone business owned and operated by Twitter, which will continue to service CrossInstall’s current clients and partners.

CrossInstall has partnerships with Facebook, Snap, Google App Campaigns and other large ad networks to offer playable ad units. Twitter will evaluate how to handle those relationships as the integration process progresses.

Twitter did not say whether it would roll out interactive ad units using CrossInstall’s technology.