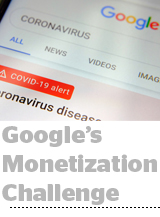 Alphabet had a surprisingly strong performance in Q1 2020, with revenues up 13% from last year to a total of $41.2 billion, according to the company’s earnings report on Tuesday.

YouTube revenue passed $4 billion in Q1, up from $3 billion a year ago.

But Google is preparing for a much tougher Q2.

The second quarter will be a difficult one for Google’s ad business, said CFO Ruth Porat. Advertising tracks with overall economic activity, so states or countries in shutdown will run dry.

Google is also hard hit by the almost total evaporation of travel advertising. Companies including Tripadvisor, Expedia and Booking Holdings, which owns Priceline, spent more than a billion per year with Google.

Google is balancing two somewhat contradictory trends. Ad revenue is going down, while consumer demand for Google services is skyrocketing.

Search advertising is taking a hit, for instance, despite a significant rise in actual searches. At the peak for COVID-19 updates in March, searches for news and information spiked more than six times the peak of user activity during the Super Bowl, Pichai said.

The company added new users at a faster rate than last year. YouTube, one of Google’s cash cows, has seen an uptick in subscribers for its TV and music packages and in general consumption. Google laptops and smart home equipment saw strong sales as well, Pichai said. And Google Cloud account seats and data consumption were also growth drivers this quarter.

But this growth in eyeballs and overall engagement across the Google portfolio doesn’t mean more money can be squeezed from advertisers, which is the real key to Google’s revenue, not device sales or cloud storage.

“At the outset of this crisis, the interest was about COVID-19 and noncommercial topics,” Porat said.

In other words, all that search and YouTube consumption wasn’t effectively monetized. Google users, for instance, saw the coronavirus information resource box placed atop searches, where the prime ad real estate normally sits.

“Though we’ve seen some recovery in consumer-related behavior, it’s not clear how durable or monetizable this activity will be,” Porat said. In other words, even as high-intent traffic and commerce return to something more like normal, Google still won’t be able to take full advantage of the potential revenue.

Consider a search for local groceries. Walmart or Instacart would love to pay for that traffic, but with concerns about the food supply chain and with securing groceries, Google is going to stick with information resources and coronavirus updates instead of cashing in on the shopping intent.

Porat said Google is cutting back on some expenses, such as marketing costs and new hires, because it’s unclear how long the coronavirus shutdown will last and the company has high fixed costs in streaming content services and content moderation, that can’t be reined in without impacting the service.

“In terms of overall priorities, we always take a long view,” he said. “The thesis remains.”