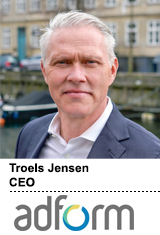 But Troels Jensen, former CEO of the Danish fin tech company Itiviti AB, who was brought on as Adform’s chief in April, is sticking to the plan.

“The long game hasn’t changed,” Jensen said. “But we do have time now to think about how we’re hitting the ground running on the other side of this crisis.”

Jensen is a rare breed in ad tech, a CEO without experience in the space. But he said ad tech has matured to be more like enterprise software, where it isn’t necessary to have deep domain knowledge to set product and strategy road maps.

“In some cases, it could be an advantage because I have an outside-in perspective and don’t have preconceived notions about how things should be or about competition,” he said.

Many ad tech companies will become more reliant on global agency holding company business during this time, Jensen said. That’s the ad tech equivalent of going back to the well during a dry spell. But any growth and new business is more likely to come from direct advertiser relationships, he said, since brands have mostly completed their own digital transformation initiatives.

“The product strategy needs to be in lockstep with the digital advertising market,” he said.

For Adform, that means investing in a full-stack ad platform and in specific markets, primarily the United States – “With a foothold in the US, you’re practically set,” Jensen said.

Adform has been in the United States for about four years, and made progress competing with American ad tech companies. Jensen said that the US market is important because relatively small share gains mean large revenue growth. Adform’s DSP is up 150% year over year through April, despite the pandemic, he said.

On the product front, Adform is committed to its long-held strategy of building a single full-stack ad platform. That sounds generic, but it is a differentiator from companies such as The Trade Desk and MediaMath that are laser-focused DSPs, while Adform offers a DMP, an SSP and publisher ad server. Players such as Flashtalking or Zeta Global are also buy-side only, and they’ve acquired and integrated other ad tech companies, whereas Adform has only developed internal software.

As the market shifts from staid product categories such as DMP and DSP to shiny new three-letter acronyms such as CDPs and CMPs (“consent management platforms” for privacy compliance), Jensen said Adform is focused on developing its own versions of those products so clients need fewer third parties.

“What products do we need to invest in now? What markets do we attack?” Jensen said. “These are tough times, but I was hired to execute on the strategy.”