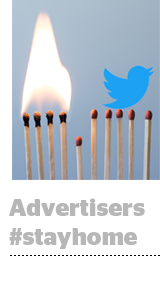 The story of Twitter’s first quarter is familiar: a strong start to the year … and then a rapid ad revenue decline in March as COVID-19 began to take hold.

Twitter posted modest growth in Q1, a 3% YoY increase to $808 million, while total ad revenue was $682 million, up $3 million compared to last year.

But between March 11 and March 31, ad revenue was down approximately 27% year on year. Read the shareholder letter.

Twitter is particularly exposed to canceled and postponed events. Live sports are out the window, some product launches have been delayed and it’s unclear whether those dollars are completely lost or just temporarily deferred.

Twitter isn’t providing guidance for the second quarter or updating its previously withdrawn full-year outlook for expenses, headcount growth, capex or stock-based compensation. Twitter also didn’t share any color about how Q2 is starting to shape up, unlike Facebook, which experienced a stabilization in ad sales during the first two weeks of April.

Because of the volatile economic situation, Twitter is focusing on revenue-generating products, including an updated version of its mobile app promotion (MAP) product and a revamped ad server. Both are top priorities this year, Jack Dorsey said.

Twitter is collecting feedback from a handful of brands piloting the new MAP product, while the ad server rebuild should be completed by the end of Q2.

There is some evidence that Twitter’s efforts are starting to pay off. Ad engagement in the quarter increased by 25%, driven mainly by increased impressions related to audience growth and better click-through rates.

The issues that Twitter experienced with MAP over the summer last year, when it took a big revenue hit after pulling back on unauthorized data sharing, appear to be resolved.

Thing is, Twitter has a lot of competition for DR dollars. Facebook and Google have been inhaling direct response budgets for years, and their tools are already well developed and deeply embedded, particularly among app advertisers.

But app install ads are a multibillion-dollar market, Segal said, and there’s room for Twitter to take a slice.

“If you think about DR as the largest piece of the digital ad market, which is faster growing that the brand side – there are so many dollars at play, we tend to think less about competing with other platforms and more about why advertisers come to Twitter.”

That’s Twitter’s highest-reported growth rate to date, but still way smaller than other platforms. Facebook, for example, reported 1.73 billion users in March, while nearly 3 billion people used at least one Facebook service on a monthly basis in the first quarter.