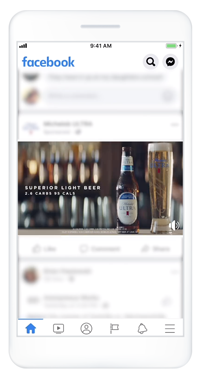 There’s no traditional upfront season this year, but Facebook is still looking for its seat at the table.

And it comes bearing gifts. On Friday, Facebook said it will extend its full set of native targeting capabilities to a small group of test advertisers using Facebook Reserve (previously called Facebook Showcase), its tool for buying guaranteed in-stream ad space in Watch.

That’s been the top ask from TV advertisers since the offering launched in February 2019, said Erik Geisler, director of North American agency partnerships at Facebook and Instagram.

Beyond the DMA and Nielsen’s demo-based targeting that advertisers are used to for TV, options include targeting by interest group, behavioral targeting and, eventually, the ability to upload Custom Audiences and target using a brand’s own first-party data.

Facebook’s pitch to TV advertisers revolves primarily around its ability to provide incremental reach among younger viewers. Facebook claims to reach 38% of people between the ages of 18 and 34, compared with the 29% that are reachable through traditional TV.

Roughly 130 million people in the United States spend an average of 26 minutes each month with in-stream reserve content across Watch, news feed and Pages, up from 100 million in February 2019.

In tests Facebook has been able to drive 9.3% incremental reach on average relative to TV for target demos.

During a recent campaign, Anheuser-Busch, for example, saw 15% incremental reach beyond TV using Facebook TV ads through in-stream reserve, and 99% on-target impression delivery among 24- to 54-year-olds. Thirty-nine percent of the reach delivered was to light or non-TV viewers.

“It’s literally the same ad across campaigns on both surfaces,” Geisler said. “But we can find the audiences that tend to be less indexed on TV.”

Facebook first started testing its in-stream reserve offering last year with basic contextual and content category targeting. The plan is to roll out the full complement of targeting options in time for the 2021 upfronts.

But for advertisers testing the additional targeting options now, there’s value in running localized campaigns. Shelter-at-home measures are being applied differently across states and cities, and local economies will likely open up on a staggered basis.

“This was always going to be a part of our upfront offering for next year,” Geisler said. “But given COVID-19, we’re probably going to see a reemergence of brands more regionally rather than nationally to start.”

“If we’re not delivering TRPs [television rating points], for example, we’re speaking a different language,” he said, “and that makes it hard for an agency to build more expansive plans.”