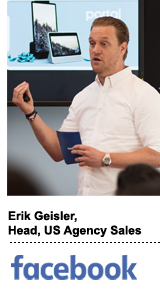 On Tuesday, Facebook said it will start letting TV buyers purchase inventory in specific programs hosted on Watch. This offering, called Showcase, resembles an upfront buy, as the inventory will be priced against Nielsen-validated demos and sold in advance at fixed prices.

This content includes programs like “Sorry For Your Loss” and “Red Table Talk,” as well as new shows, like a coming-soon reboot of MTV’s “The Real World.”

While advertisers have been able to reach specific Facebook audiences watching curated content for about a year, Showcase lets buyers reserve placements with price certainty throughout the year, rather than quarter by quarter. So now, Facebook can insert itself into a marketer’s broader planning cycle. Whatever doesn’t get sold upfront will be available in the equivalent of a scatter market.

Facebook doesn’t share its rate card, but CPMs are “competitive with other ad platforms like us,” said Erik Geisler, Facebook’s head of US agency sales, at a press event in New York City on Tuesday. In Q1, CPMs ranged between $23 and $25.

Advertisers will also be able to exclusively sponsor programs for US viewers and target people based on additional content categories, including food and news. (Advertisers could already run contextual placements against sports, entertainment and fashion/beauty.)

Showcase is designed to meet the video advertising marketplace where it is, rather than Facebook creating its own rules and asking advertisers to adjust, Geisler said.

Just shy of 100 million people in the United States engage with in-stream reserve content across Watch, news feed and Pages every month, according to Facebook. YouTube says that people watch over one billion hours of video on its platform every day, so Facebook has some catching up to do against its digital competitors in terms of scale.

But perhaps its more limited scale and content offerings give Facebook an advantage around brand safety. YouTube has had a few brand safety kinks to work out, most recently when advertisers pulled YouTube spend last week after they monetized videos with comment sections that were rife with pedophiles.

All of Facebook’s in-stream reserve content is human reviewed before it’s made available for monetization.

And against linear TV, Facebook notes 43% of its audience is between the ages 18 and 34. Only around 28% of TV viewers fall within that hard-to-reach demo, based on Nielsen’s numbers.

On the other hand, while daily viewers consume roughly 20 minutes of Watch content per day, they’re doing so incrementally, watching a scattering of short videos throughout the day – so Facebook minutes aren’t 60 consecutive seconds, which is what TV buyers expect.