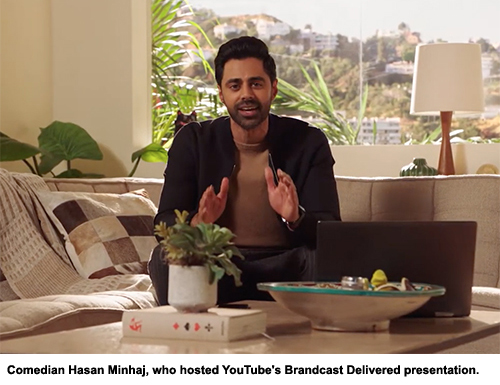 This year’s NewFronts cemented streaming as a main vehicle to reach TV audiences following a massive shift in viewing behavior fueled by the ongoing COVID-19 pandemic.

The theme of the IAB’s three-day event was “Living The Stream,” and this year’s presenters reflected the big changes in a programming market that has seen the launch of five new streaming services, including Paramount Plus, Discovery Plus and PrendeTV.

CTV ad spend experienced 22% growth year-over-year in 2020 – its highest gain to date – while nearly three quarters (73%) of CTV buyers shifted budgets from broadcast and cable to CTV this year, according to IAB data. Advertisers, on average, spent $20 million on CTV in 2020, and more than a third (35%) expect to spend more this year.

The newcomers also included A&E Networks and NBCUniversal – mainstays of upfront presentations. The two were among a cohort of networks pitching unified linear and digital buying.

These presentations emphasized quality programming above all, but also new ad products and other “solutions,” as they compete for a share of the $11.4 billion dollars projected to be spent in streaming this year, a figure that will increase to $14.1 billion in 2022, according to eMarketer.

Here are three big trends from this week’s presentations.

Television manufacturers Vizio and Samsung leaned in heavily to this year’s NewFronts with their own advertising offerings as they looked to compete with market leader Roku.

Roku officially rolled out its OneView ad buying platform, the dataxu DSP it rebranded in 2020. Through its strategic partnership with Nielsen, it is one of the first buying platforms to provide Nielsen reach and frequency reporting by age and gender across linear TV, streaming, desktop and mobile phones.

Back in March, Roku struck a deal to acquire Nielsen’s Advanced Video Advertising business, inheriting capabilities in automatic content recognition (ACR) and dynamic ad insertion (DAI). It highlighted those capabilities along with its unique first-party data set in OneView to solve for identity in a cookieless world.

Vizio and Samsung Ads touted their abilities to control for frequency across TV and streaming through their ACR data sets.

Vizio, which went public in March, announced its latest offering, called Household Connect, which enables advertisers to target consumers on other devices based on what they saw on their Vizio TVs, as well as Vizio Features, which pairs together first-party data distribution and targeting capabilities with mainstream and emerging content partners. It also partnered with Verizon Media to connect Vizio’s TV viewership data to Verizon Media’s DSP.

FuboTV has teamed up with LiveRamp to bolster its contextual and addressable targeting capabilities, while Tubi touted a new Advanced Frequency Management tool that eliminates ad repetition, one of the industry’s biggest problems.

Amazon meanwhile said it will offer audience guarantees through the Amazon DSP, and highlighted new offerings on Twitch and IMDbTV.

“With the inclusion of Twitch, Amazon grew its addressable universe from 20 million to 120 million year over year,” said Jesse Math, VP of advanced TV and video solutions at Tinuiti. “The boom leaves advertisers wanting for standardization across platforms.”

The company also featured YouTube Select "Lineups,” a method of buying ad placements with top content creators not generally available via auction. These can be targeted according to genre or topic.

Roku rolled out its advertising brand studio to produce new creative ad formats and TV programming tailored for marketers, allowing advertisers to take Roku brand experience such as custom home screens, pubs and sponsorships and bring them to life in streamers’ living rooms with an augmented reality lens.

Marketers are also eyeing opportunities for ecommerce in CTV.

The company unveiled a new interactive ad feature, brand extensions, which allows viewers to learn more about a product by sending a URL to their phone or second screen with a click of a button without interrupting their viewing experience. Brands will be able to measure conversions generated by brand extensions directly in Google Ads, the company said.