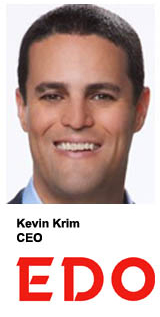 EDO expanded its Ad EnGage measurement solution Tuesday so it can cover streaming environments and give brands insight into their competitors’ activity in AVOD platforms, traditionally a blind spot for marketers.

Ad EnGage Competitive Intelligence Streaming tool is designed to measure advertising activity on AVOD platforms – such as Hulu, Tubi, Paramount Plus, NBCUniversal’s Peacock, and Roku. Marketers using it will get insight into ad occurrence, targeting and messaging strategies and trends, which helps them better understand where their ad dollars – and their competitors’ – are going.

EDO is teaming up with Univision ahead of the upcoming launch of the network’s free AVOD service exclusively for Hispanics, PrendeTV. PrendeTV is being added to EDO’s roster of streaming platforms available for analysis in Ad EnGage CI Streaming.

“It will give us visibility into which advertisers are active in the AVOD space,” said Roberto Ruiz, Univision’s executive vice president of research, insights and analytics. “When you look at what’s going on in streaming, you realize that categories like pharma is seventh in terms of ads in linear, but is number one in streaming. These products are going to allow us and our clients to see what’s going on in terms of ad intel on streaming now versus linear.”

In September, EDO – which snagged $12 million in Series A funding in 2018 to build out its TV measurement service – initially launched its Ad EnGage platform to show how linear TV campaigns drive search engagement.

Both the linear and the new streaming solutions are best used together, Krim said, in order to give brands a unified view of their premium TV investments. He added that the next step toward convergence is to launch the search engagement component for streaming in Q4 to determine the efficacy of ads.

“What’s really exciting to us is what’s going to happen at a later stage, which is when we will be able to connect advertising activity on streaming platforms to search,” Ruiz said. “That is going to be probably one of the first mid-funnel attribution tools that is going to be available for clients.”

Krim said that in AVOD, marketers have long relied on the streaming platforms providing information about who else was spending on the services.

“No one had an objective third-party view that was representative across the whole landscape of what was happening,” Krim said. “Now, you can say I can see not only what my competitors are doing on Hulu, but across each of these major platforms in AVOD – plus I can compare that to linear TV.”

Krim said that one automotive client had begun to pull back its AVOD ad spend during the COVID-19 pandemic. But after using Ad EnGage CI Streaming last year while the tool was in beta phase, the company reversed course after it saw that its competitors were highly active in the space.

“We’re keeping track of the context that the ad is being delivered in,” Krim said. “If the ad is being served on a comedy like ‘Letterkenny’ on Hulu, or on a rerun of ‘The Office’ on Peacock, we will register that.”

EDO collects its own data, which Krim said does not include any proprietary or sensitive information from brands or publishers.

“We’re not asking for information from either party,” he said. “We’re not revealing anything about them that they would be holding tight within their confidential or siloed data.”