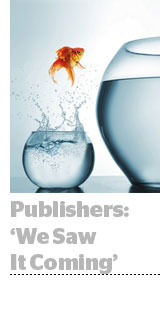 With Chrome bidding farewell to third-party cookies, publishers predict a steep rise in use – and value – of their first-party data.

Media companies with their own audiences and direct-to-consumer relationships expect power to accrue to them.

And many publishers already have a head start. With Apple’s Safari browser blocking cookies for about 30% of US web traffic, most media companies already invest in first-party data solutions to lift the CPMs of their cookieless traffic.

“Most publishers I talk to are not panicking,” said Rubicon Project CTO Tom Kershaw. “They are following through with the strategies they already have, leveraging publisher segments they already have, and using first-party identifiers to persist universal IDs and more effectively deliver ads.”

(In contrast, advertisers were less prepared because they focused on the 70% of traffic that wasn’t blocked by cookies.)

The large publishers that have invested in first-party data include a mix of new and old media: Vox Media, News Corp., Meredith, Insider Inc., Watson Advertising’s weather data, Hearst and Dotdash, among many others.

Vox Media, for example, launched its first-party data platform Forte in December. “If you have a direct connection with audiences and deliver the best advertising outcomes, your business will thrive, and that's where we're focused,” said Chief Revenue Officer Ryan Pauley.

It’s publishers’ jobs to understand who their audiences are, said Sara Badler of Dotdash.

“We go to market knowing our audiences, how they contextually align, and we’re very confident in how that works,” she said

But Hearst Chief Data Officer Mike Smith had a more cautious outlook, since there's a lot the publisher community doesn't know about the Privacy Sandbox's nascent tech. While the end of third-party cookies should theoretically make publisher first-party data more important, what will happen if Chrome also comes up with a solution that replaces first-party cookies?

The potential downsides for publishers

Many publishers bet that advertisers will turn to publishers as third-party data disappears from the ecosystem. Others aren’t so sure.

Publishers will take a revenue hit as they manage the change, Hlavacek said. “In the short term, I do think removing third-party cookies will lead to revenue loss for publishers. The evidence from Safari is overwhelming.”

Larger publishers with direct sales forces stand to benefit more than those relying purely on open programmatic, since scaled publishers will have an easier time activating first-party data.

“There will be a more intense focus on PG [programmatic guaranteed] and PMPs [private marketplaces], both of which can add real value,” said Jana Meron, SVP of programmatic and data strategy at Insider Inc.

Meredith believed the change would increase direct connections between advertisers and publishers. “The value of PG and direct will go up in the intervening time,” said Chip Schenck, SVP of data and programmatic solutions.

It’s also possible that ad networks, which aggregate publisher supply, will become popular again if they can simplify the buying and user matching process. Publishers want to avoid getting disintermediated yet again by ad tech.

“I have a concern that remnant inventory will become prominent again and that there will be a commensurate race to the bottom in the industry,” Meron added. “Publishers will need a strategy for that too.”

But Badler doubts the industry would revert to a world of direct buys and ad networks. Instead, publishers must be “comfortable with being uncomfortable” as yet another change rumbles through the industry. “There are still a lot of unknowns,” she said.

A win for walled gardens

Another risk for publishers is that the lack of third-party cookies will send buyers to walled gardens. They could buy more on Google search or within Facebook – rather than smaller publishers with first-party data assets.

“Marketers [will] resort to large incumbents as opposed to new innovators,” Hlavacek predicted.

Google will also benefit from its browser changes. “Google's announcement will significantly impact innovation and competition in the independent ad tech ecosystem and further strengthen their own unfair position,” said Christopher Guenther, SVP and global head of programmatic at News Corp.

And though a handful of publishers – News Corp and Meredith among them – have recently sold their ad tech acquisitions, Schenck wondered whether an ad tech company with a downward-spiraling valuation may become attractive to a new type of opportunistic acquirer: a publisher.

“This accelerates consolidation,” he said. “Could this be the indicator for publishers with first-party data and an identify graph to acquire ad tech companies?“