Google Ad Manager’s position among publishers has strengthened since the last report conducted in Q3 of last year, and it has extended its lead compared to the rest of the pack.

“Google is more dominant here than in any other ad tech category,” said Mannion.

For example, 60% of publishers named Google Ad Manager as their top partner, while 12% 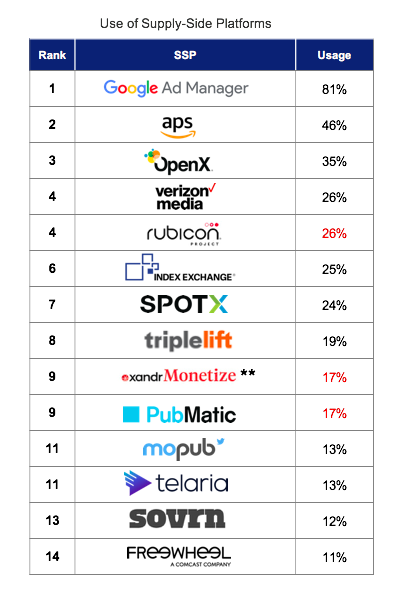 said Amazon Publisher Services – which placed second in the category – was their preferred partner.

The rest of the top 10 most preferred SSPS (such as OpenX, SpotX and Verizon Media), were ranked No. 1 by only 3% to 6% of publishers, a sign of Google Ad Manager’s dominance among publishers.

81% of publishers claim to use Google Ad Manager, compared to 46% who say they use Amazon Publisher Services. And the rest of the top 14 SSPs worked with 35% to 11% of the publishers surveyed.

Much of Google’s strength comes from its technology, with 78% of publishers giving Google Ad Manager the highest rating for “superior technology position,” a nine-point increase from the last report.

And 90% of publishers viewed Google Ad Manager as an SSP market leader, up from 79% during the previous survey last fall.

Google and Amazon were first and second respectively among both large publishers (more than 20 million monthly uniques) and small publishers. But the remaining SSPs surveyed by Advertiser Perceptions ranked differently in use among the two groups.

For example, Index Exchange was the third most used SSP among large publishers – 44% used it. But it was ninth among small publishers, where only 14% used it.

Smaller publishers (under 20 million unique visitors) worked with fewer SSP partners. They tended to use four SSPs on average, compared to large publishers, which used six. Publishers planned to add one additional partner, for a total of six, over the coming year.

In Advertiser Perceptions’ last reports, rebrandings generally led to a decline in ratings among publishers.

While Verizon Media is now recovering from a steep decline after its rebranding from Oath platforms a year ago, AppNexus is seeing a decline from its more recent rebranding to Xandr Monetize.

Xandr Monetize’s rebranding left it wavering in the rankings for “consideration.” Last quarter, 43% of publishers considered using it, compared to 19% in the most recent report.

Verizon Media is on the “rebound,” Mannion said. Perception among publishers is improving. He cited a 10-point increase in perception of the SSP as a market leader, and a 20-point increase in perception of its technology vision compared to Q3. In that survey, Advertiser Perceptions listed it post-rebrand by its old name, Oath Platforms. Those big increases catapulted the SSP into third place and fourth place, respectively, in those categories.

And although it hasn’t been rebranding, across the board, OpenX fell slightly across a number of categories, Mannion noted. Though placing third in adoption, only 36% of publishers viewed OpenX as a market leader, down from half in the previous report. OpenX also lost 11 points in perception of the company having a superior technology vision.

There’s yet another factor that didn’t play into these rankings: the coronavirus pandemic. The survey took place in February, before the advertising industry started feeling the economic effects of the health crisis.

But the future innovation publishers want from their SSPs remains relevant even post-pandemic.

“Publishers tell us that they aim at zero tolerance for fraud and bad ads,” Mannion said. “They want their SSPs to be their trusted partners toward that end.”