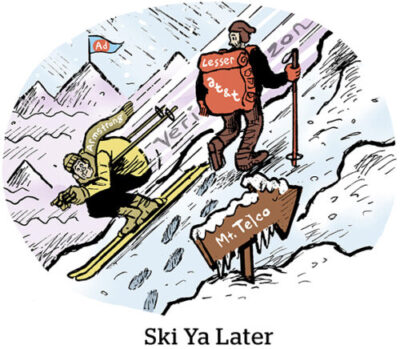 Set aside the rubble of AT&T’s once-ambitious plan to build a top global ad business with Xandr that would monetize Time Warner and outside media, powered by AT&T mobile data. Kilar said AT&T did provide the cover he needed to make tough changes without investors’ pressure on short-term goals.

When AT&T bought Time Warner, advertising was the nightmare scenario for HBO. But as of last year, HBO has an ad-supported tier.

“Close to 50% of every new [HBO Max] subscriber is choosing the ad tier,” Kilar says. Soon, ad-based will be the majority of sign-ups – partly because WarnerMedia prefers it. He says WarnerMedia makes slightly more on the average ad-supported user – who still pays $10 per month rather than $15 ad-free.

Hulu has made its ad tier more enticing relative to ad-free over the years, because it makes more per subscriber. Three in five new Hulu sign-ups are ad-supported.

Kilar also says it’s “inevitable” Netflix introduces ads, because if it wants to grow from 220 million to 400 million, 800 million, a billion users, it must provide options, not just one rate.

Etsy is in an awkward adolescence as it tries to grow from niche goods marketplace to legit ecommerce player.

Mandatory investments in its online advertising platform also rankle sellers, The Wall Street Journal reports. Sellers are also protesting Etsy’s push to get them to offer free shipping – another chip off the profit margin. Plus, the company instituted its first sales fee hike since 2018.

Etsy sellers with more than $10,000 in online sales per year must reinvest a portion back into Etsy’s managed advertising service, which targets off-site ads that lead back to Etsy stores. There’s precedent for this type of requirement, like mandatory retail media investments with a grocery chain that carries a brand. Etsy’s fees are still lower than the cost of advertising and mandatory fees on Amazon or eBay sales.

Crafts sellers face a different dynamic, though. They don’t ship pallets from factories to warehouses. Someone who carves wooden bowls by hand and has a long queue of customers to purchase doesn’t benefit from Etsy advertising. People who see the products and click are ticked off to discover a wait list. And any conversion driven by Etsy ads is fully extracted from the seller, who’d fill the sale regardless.

LiveRamp, Publicis-owned Epsilon, IPG-owned Acxiom, Gravy Analytics and Cuebiq get callouts as major players “that you may never have heard of.” (Ouch.)

Oliver explains why first-party cookies exist for legit purposes – and why third-party cookies disturbed web users since they were invented.

Cookie-based audience segments compiled by data brokers are amusing – “Kids and Cabernet,” “Golf Carts and Gourmets,” “Ambitious Singles,” etc. – but sensitive data is available, too. A local TV station proved it by purchasing a list of households with pregnant women and going to the homes to find … pregnant women. The ZIP code could have been broken down by diabetics, cancer patients or people battling depression.

Medical data is protected between a doctor or healthcare provider and a patient, but not between a user and search engine. The same goes for financial info, but only if you consult a professional rather than type “help im behind on bills” into Google.

Following an $80 million private equity round, Food52 lays off 10% of staff in apparent shift from a content-based media business to commerce focus. [Insider]

Epic Games, the maker of Fortnite, raises $2 billion – $1 billion each from Sony and the LEGO company – at a $31.5 billion valuation. [release]