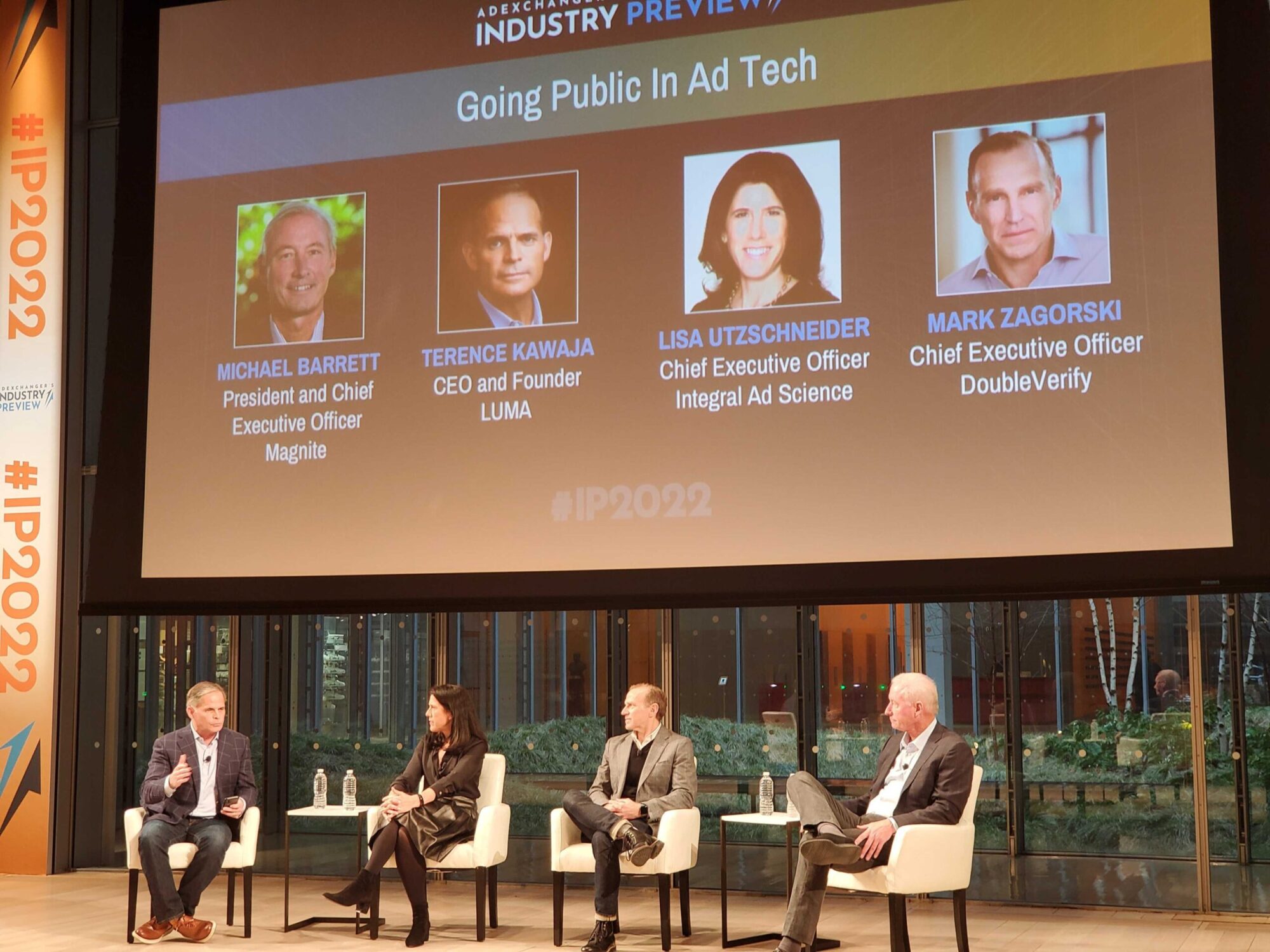 With more than two dozen companies operating in the digital advertising space now listed on stock exchanges, what it means to be public has changed significantly in the past year.

So what lessons have ad tech CEOs learned in their transition from private to public?

Going public means looking good to investors. The CEOs agreed it’s best to emphasize unique strengths rather than invite comparisons. Being different from the crowd makes a company more attractive to investors.

Not that they’re encouraging anyone to go public behind them.

Joining the crowd can leave companies competing for a small portion of a tech investor’s capital spend. Tech investors tend to take a generalist approach, and there aren’t a lot of, if any, dedicated ad tech investment firms.

“It wasn’t helpful to the overall valuation of the industry to have that many IPOs in one year,” Barrett said. “If I’m a generalist and 10% of my portfolio is dedicated to ad tech, three IPOs have eaten up that 10%. So now I can’t buy any more.”

All of the panelists advised ad tech companies that are currently considering a public offering to take their time and be strategic rather than sprint to join the IPO crowd. “Have a clear strategic plan, a clearly defined vision. And don’t rush,” Utzschneider said.

A successful IPO comes down to three things, according to Zagorski: a unique vision, a unique value proposition for clients and unique and sustainable financials that will energize the business going forward.

Going public also means a stock can go up and down for reasons beyond what a CEO can control.

The list of external forces affecting ad tech lately is a long one. Kawaja pointed to Google and Apple’s identifier deprecation, privacy legislation and legal decisions, antitrust action and the global pandemic. And he deadpanned that Russia’s invasion of Ukraine “would be bad,” to put it mildly.

Once a company is publicly listed, it is beholden to the whims of the market and market analysts.

Because Wall Street doesn’t have a firm grasp on the (some would say intentionally slippery) ad tech industry, investors can be blind to long-term trends, and they are highly reactive to short-term fluctuations in revenue, regulatory and policy changes and anything else that might suggest risk.

“You have to deal with the market dinging your valuation because another company’s numbers were down,” Zagorski said.

For one example of this dynamic at play, look no further than the ripple effect Meta’s disastrous Q4 2021 earnings report had on the wider market, including ecommerce companies.

Part of the responsibility for a publicly traded company is to help investors understand that what hurts one advertising company could help another. Case in point: IAS benefits when identity goes away because it offers contextual advertising. “Your shock is my tailwind,” Utzschneider said.

CEOs must continue to point out these differences to investors as Wall Street plays catch up after the ad tech industry’s IPO rush.