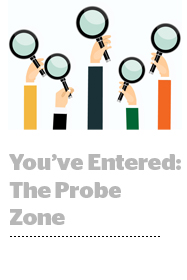 Big tech can’t swing a cat these days without hitting an antitrust investigation.

Google, Facebook, Amazon and Apple are all facing varying degrees of heat from the Department of Justice, the Federal Trade Commission, state attorneys general across the nation, the House Judiciary Committee and competition authorities around the world.

It’s hard to keep track of all the antitrust action, and there’s likely to be more. Here’s a cheat sheet on who’s investigating what and why – so far.

In June, the DOJ announced a broad antitrust review of the “market-leading online platforms” and whether they’ve achieved their market power by engaging in anti-competitive practices.

This review is a big-picture information gathering exercise in which the DOJ will talk to lawyers and economists, gather publicly available information and check in with big tech’s competitors.

Although the actual announcement was vague – it didn’t call out any online platform by name – the DOJ said it’ll look into the concerns that consumers, businesses and entrepreneurs “have expressed about search, social media and some retail services online.” Aka, Google, Facebook and Amazon.

In early September, Alphabet disclosed in a regulatory filing that the DOJ had requested information and documents related to its “prior antitrust investigations in the United States and elsewhere.”

The Justice Department’s sector inquiry into big tech is separate from the more formal investigations it’s said to be conducting into Google’s search and advertising business. News of the probes leaked in June but was never acknowledged by the DOJ, whose policy is to not confirm, deny or otherwise comment on its investigations.

The DOJ is also reportedly authorized to investigate Apple from an antitrust perspective. The FTC and DOJ, which share antitrust enforcement authority, have divided oversight of the big tech big four. The DOJ gets Google and Apple, while the FTC gets Facebook and Amazon.

But cracks are starting to show in this power-sharing arrangement, which creates questions about how the DOJ and FTC will support each other as they take on big tech.

The agencies have been clashing over their antitrust turf. The most salient and recent example came after the FTC won an injunction this summer against Qualcomm in court over patent licensing. The DOJ sided with Qualcomm, rather than the FTC, and issued a brief that helped the chipmaker win a reprieve from enforcement.

According to The The Wall Street Journal, FTC Chairman Joseph Simons wrote a testy letter to the Justice Department’s antitrust division last week in which he criticizes the DOJ’s behavior. Despite their arrangement to divide and conquer the ad tech giants, the FTC and DOJ are also reportedly tussling over who will lead the Facebook inquiry.

During a scheduled Senate Judiciary antitrust subcommittee hearing on Tuesday, Simons and Makan Delrahim, chief of the DOJ’s antitrust division, are expected to face questions from lawmakers on how the agencies are – or aren’t – collaborating.

As it stands, the FTC’s investigation is focusing on whether Facebook acquired rival tech startups, including Instagram, to remove competitive threats.

The probe is separate from the FTC’s $5 billion fine of Facebook in July over privacy violations related to Cambridge Analytica.

In February, the FTC launched a Technology Task Force within its Bureau of Competition that will monitor potential anti-competitive conduct in US tech markets and review consummated mergers.

The commission is also sifting through the information it gathered during a series of hearings into competition and consumer protection which kicked off last September. Reports, guidance, policy statements and possible enforcement action could follow. The commission is also developing a protocol for how to conduct retrospective merger reviews.

On the Amazon front, Bloomberg reported last week that the FTC is starting to talk to small businesses about how much revenue they’re able to make through the online marketplace compared with competitors, like eBay and Walmart.

In June, the House Judiciary Committee announced a bipartisan investigation into competition within digital markets that will also assess whether existing antitrust laws, competition policies and current enforcement levels are up to snuff.

As part of its probe, the House Judiciary antitrust subcommittee sent four separate requests for information on Friday to Facebook, Alphabet, Amazon and Apple looking for executive emails and other documents related to competition matters, including past acquisitions.

The subcommittee is on the hunt for specifics. The letter to Alphabet reportedly asks for emails that discuss Google’s acquisitions of DoubleClick, YouTube and Android, its search algorithm and its Play Store policies. Amazon’s letter is scouting for info on the company’s many acquisitions across industries and details on how Amazon ranks products on its platform.

The companies have until Oct. 14 to respond.

Big tech isn’t just facing scrutiny from the feds – the states are getting involved.

A separate but overlapping group of attorneys general headed by Texas AG Ken Paxton is running a collective investigation into whether Google is monopolizing the online advertising and search markets. The probe involves nearly every state in the nation, with the exception of California and Alabama. (Puerto Rico and Washington, DC, round out the group.)

Paxton didn’t waste any time. Just days after announcing the probe, he sent a subpoena to Google that includes more than 200 questions and demands for information about its advertising business.

Global competition authorities are also paying close attention to big tech – Europe in particular – and the scrutiny is only set to get more intense with the appointment of Margrethe Vestager to a second term as competition commissioner for the EU.

Facebook is battling the German cartel office over its data collection and gathering practices, while the EU opened a new antitrust investigation into Amazon in July over whether collecting data from its merchants gives it an unfair advantage.

The EU has also issued record-breaking antitrust fines in recent years – more than 8 million euros so far – in cases related to Android and Google Shopping.

At the same time, antitrust regulators around the world, including in the United Kingdom, Spain and Australia, are conducting sector inquiries into the digital economy and in many cases issuing reports with recommendations on how their governments can protect consumers while also ensuring competition in the market.