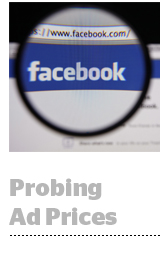 New York Attorney General Letitia James is leading a bipartisan investigation into whether Facebook engages in anticompetitive behavior to drive up ad prices.

James, a Democrat, is being joined in her work, which will also look into whether Facebook’s actions have endangered consumer data and reduced the quality of consumer choice, by eight other state AGs from Colorado, Florida, Iowa, Nebraska, North Carolina, Ohio, Tennessee and the District of Columbia.

In a statement released Friday, James declared that the probe will “use every investigative tool at our disposal” to understand Facebook’s dominance in the industry and potential anticompetitive behavior.

Ad prices on Facebook’s own properties are affected by three main forces: competition in the auction, ad load saturation and tweaks that Facebook makes to its algorithms.

Remember when Facebook decreased reach for publisher and business content in the news feed in favor of posts from friends and family in order to prioritize quality time over total time spent? Well, when time spent goes down, there’s less inventory to go around and higher CPMs to try and snag it.

With more than 7 million advertisers, Facebook also benefits from the network effect of its scale.

It makes another nice chunk of change away from its O&O through Audience Network. Reach extension will net Facebook around $4.8 billion in programmatic ad spend this year, according to an estimate from ad tech consultancy Jounce.

But when Facebook plays in the open ecosystem, rather than using its scale to push prices down, its enormous and diverse advertiser base lets Facebook find the specific advertiser willing to pay the most for a particular placement.

But Facebook isn’t the only Big Tech platform in the hot seat.

A separate bipartisan coalition of attorneys general – roughly three dozen, according to The Wall Street Journal – are launching an inquiry into Google led by Republican Texas AG Ken Paxton. The investigation, which will reportedly zero in on how Google impacts digital advertising markets, is set to be formally announced at a press conference in Washington, DC, on Monday.

The Facebook effort being spearheaded by James and the Google probe headed up by Paxton are not connected to similar investigations being conducted by federal agencies. Google and Facebook are also facing antitrust probes led by the Department of Justice and the Federal Trade Commission, respectively.