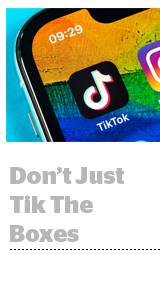 TikTok isn’t developed enough yet to be a fully-fledged contender for ad dollars, but it’s growing like #area51, and advertisers have finally noticed the short-form video app.

Roughly 60% of the app’s 26.5 million monthly active users in the US are between 16 and 24, according to a TikTok pitch deck circulated to US ad agencies earlier this year, and it’s also strong among younger teenagers, females in particular. Users must be 13 or above, however, to sign up without a parent’s consent.

“Gen Z is TikTok’s sweet spot, and it’s maybe the most authentic place to reach that audience,” said Noah Mallin, a managing partner and head of content and experience at WPP agency Wavemaker.

But TikTok is still a long way from earning a regular spot on the media plan. Even Snap hasn’t achieved that status with some buyers yet, said Jon Morgenstern, SVP and head of investment at VaynerMedia.

The targeting options on TikTok are rudimentary; brand safety and media quality issues are cropping up; the app was fined $5.7 million in February over a COPPA violation; there’s no API or self-serve option yet; and advertisers are obliged to develop bespoke creative if they really want to make a splash, just like they did for Snap before vertical video caught on.

Still, some advertisers are itchy with curiosity, as they usually are about any new platform that shows promise.

More than 90% of TikTok’s users visit the app multiple times a day and it was one of the top five most downloaded non-game apps across iOS and Google Play last year, according to SensorTower.

But TikTok isn’t rushing to launch an ad platform. For now, it’s in education mode, meeting with brands and agencies to collect ideas and explain what sort of content works in its native environment.

“We’re currently exploring a variety of opportunities to create value for brand partners,” a ByteDance spokesperson told AdExchanger, “with our main focus being on creating a great experience for our community.”

Although TikTok might seem like it materialized out of nowhere directly onto the homescreen of every member of Generation Z, TikTok isn’t a typical new kid on the block – it’s got 500 million global monthly active users in 154 countries around the world. Douyin, as it’s known in China, has 300 million monthly actives.

TikTok is owned by Beijing-based tech company ByteDance, founded in 2012, which also operates a popular news and content platform in China called Toutiao and news app News Republic. In late 2017, ByteDance acquired lip-synching app Musical.ly for $1 billion and merged it the following year with TikTok under the TikTok name.

Although TikTok doesn’t operate in China, the app’s international scope is an appealing prospect for global brands looking for global reach. Advertisers that experiment with TikTok can parlay their experience into an opportunity on TikTok’s Chinese counterpart, Douyin. Most scaled social apps have no foothold in China, a market that “is kind of an impenetrable black hole for Instagram, Facebook or Snap,” Mallin said.

Advertisers overall aren’t -– or aren’t yet – all that concerned about what the company’s Chinese ownership could mean from a data-sharing perspective (a la the recent controversy over Russian face filter app, FaceApp). That could change, however, if public perception swings in reaction to enough bad press, Mallin said.

The same is true for brand safety concerns. Advertising on a new platform is directly correlated to a brand’s personal risk tolerance level. “As with any place where the content is user generated, there’s always the possibility that you might be adjacent to something you don’t want to be adjacent to,” Mallin said. “That’s not unique to TiKTok.” Although it’s still the earliest of days in terms of paid advertising opportunities, TikTok does have four ad formats: in-feed autoplay vertical video, branded lenses, branded home screen takeovers and the sponsored hashtag challenge, which is the most native of the bunch.

Pricing is “pretty competitive” compared with comps, especially for reaching a young audience, said Elijah Harris, SVP of paid social at IPG Mediabrands. While there is a minimum investment requirement, in some cases it can be as low as $6,000. Prices for formats like in-feed video and branded takeovers were three to four times higher on Snap when it first launched, Harris said.

In-feed content ads are akin to Stories, branded lenses are similar to Snap lenses and home screen takeovers allow a brand to be the first thing users see when they open the app. (Snap offers a similar ad product.)

Hashtag challenges let advertisers be a bit more creative. Most hashtag challenges are organic – someone posts a hashtag, like #backflipchallenge, and thousands of people post videos of themselves doing backflips – but brands can take advantage of the UGC bonanza by posting hashtags of their own.

Guess, for example, partnered with TikTok on an #InMyDenim challenge, where people posted videos of their super-quick fashion transformations, and Chiptotle recently struck viral gold with the #ChipotleLidFlip challenge.

But brands should beware of hamfisted attempts to engage with TikTok’s audience in the “battle of the 13 year old,” said Kieley Taylor, managing partner, global head of social at GroupM.

“Hashtag challenges have the potential to generate a cultural moment on TikTok, but finding the balance of an interesting challenge prompt and reaping brand value can be difficult,” she said. “If the balance is off, the effort can fall flat. Get steeped in what will ‘play’ well on the platform before investing in this tactic.”

Which is good advice in general for brands that want a dip a toe into something new.

“The great thing about TikTok is their audience and influencer network as they crave authenticity while in the app,” said Alex Weinstein, SVP of growth at food delivery app GrubHub, one of one of the first brands to experiment with running an app install video ad on TikTok earlier this year.

“Brands should embrace this new format and have fun with creative in a way that aligns with the platform,” Weinstein said.

Not fully baked yet

But brands that want to play around on TikTok shouldn’t expect a platform on a platter.

Like any social network in the early stages of its monetization journey, the measurement capabilities are basic and the targeting options are table stakes: age, gender, geo and certain native signals based on engagement with the platform, such as affinity or interest.

“It’s very, very limited from a targeting perspective, and even more limited as far as reporting back,” IPG’s Harris said. “And that makes it hard to justify spending on the platform at this stage outside of working with influencers who have a following that aligns with your target audience.”

But those are just temporary hurdles.

Although today, advertisers have to work directly with TikTok reps to buy ads on the platform, it’s “clear that self serve is the future,” said VaynerMedia’s Morgenstern.

TikTok declined to share details, but it’s been reported that reps are briefing agencies on the product road map, which includes the introduction of a self-serve UI, biddable media and better targeting and measurement options.

But TikTok is on a good trajectory, Harris said, at least from an advertiser perspective.

“It’s always a process, and I wouldn’t say TikTok is doing too bad,” he said. “They’ve gotten salespeople on the ground quicker that other platforms we’ve seen come up in a similar way.”

Story updated to reflect that TikTok does not operate in China.