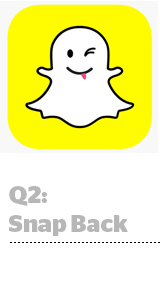 Turns out people really like those Snapchat baby face and gender swap filters.

The app’s daily active users hit 203 million in Q2, up 8% year over year, and revenue was far better than expected at $388 million, a 48% increase from this time last year, according to the company’s Q2 earnings disclosure.

This is the second good quarter for Snap in a row after a string of less-than-stellar reports. Last quarter, daily active users (DAUs) increased by 8.9 million (5%), but the year before, user growth had lagged.

The DAU jump in Q2 is thanks, at least in part, to Snap’s investment in augmented reality. The company estimates that somewhere between 7 million and 9 million of its new users came to the platform to mess around with its face filters.

More than 200 million people played with the filters, which can be used to change a person’s appearance in real time, within the first two weeks after launch. And Snap saw more engagement with augmented reality lenses created by its users in Q2 than in the entirety of 2018, CEO Evan Spiegel told investors.

Investment in AR “not only brought in some new users to the platform, but increased engagement with existing users,” said CFO Derek Andersen.

With more users on the platform, engagement on the upswing and the redesign of its Android app under its belt, the focus now is to attract more advertisers to Snapchat.

The “single biggest driver” for Snap’s revenue in the short-to-medium term will be increasing the number of active advertisers using the app, said Jeremi Gorman, Snap’s chief business officer.

“We have significant headroom in our business given the high levels of user engagement and ample supply of available impressions,” she said.

The top three priorities for the foreseeable future from a monetization perspective, Gorman said, will be to keep rolling out new creative ad formats that are easy to use to attract more small- and medium-sized businesses; to prove ROI and optimize for whatever outcomes advertisers are looking for; and to align the Snap sales team around advertiser needs and objectives.

Snap declined to share how many advertisers are spending on the platform right now other than to say that the overall number of advertisers is growing across both brand and performance, as is spend per advertiser, which “bodes well for the long term,” Andersen said.

But although Snapchat’s average revenue per user for the quarter also showed an impressive increase – up 37% year over year to $1.91 – ARPU is still way less than Facebook, Instagram and Twitter.

And there was no word on Snapchat’s planned ad network. Snap said in April that it’s planning to launch an audience extension product called Audience Network. The beta likely won’t open until sometime this summer.