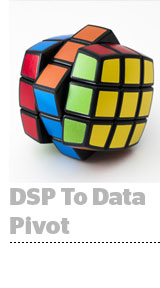 How does a smaller DSP survive, as the largest buying platforms command more of the marketplace? For Dstillery, the answer is to become a data company.

Dstillery officially shut down its bidder and stopped operating a DSP on July 1. Its focus now is selling custom audience segments through the buyer’s DSP of choice. Since its managed service business still accounts for the majority of Dstillery’s revenue, it runs client campaigns through a seat on an external DSP, often The Trade Desk.

But growth for the managed DSP business is stagnant, while the new business selling audience segments is growing at a compounded rate of 20% each month. Dstillery expects audience segment sales to contribute one-quarter to one-third of net revenue this year.

Over 800 customers have purchased Dstillery’s customer segments through their DSPs including The Trade Desk, Google Display & Video 360, MediaMath, Xandr, Adobe Audience Manager and TremorVideo DSP and the onboarder LiveRamp.

The transition from DSP to data company started almost two years ago, and Dstillery claims it’s now stronger than ever.

DSP technology was becoming increasingly commoditized, yet required continued investments to connect new inventory sources, improve the supply chain and add features. For a large DSP, those costs are spread out across a huge customer base. For a smaller DSP like Dstillery, those costs added up, and it saw the writing on the wall.

“Those with scale will ultimately win,” said CEO Michael Beebe, who joined midway through this transition in August 2018. “Putting more dollars and capital infrastructure into managing an undifferentiated technical platform was unlikely to generate ROI.”

Instead, Dstillery underwent strategic planning, and realized its differentiator was building clean, high-performing data models for clients. So it decided to finally listen to customers who wanted to use Dstillery data without having to buy media through the company too.

Dstillery’s selling point is that it uses meticulously cleansed, transparent third-party data to create its AI-driven custom segments, which it refreshes daily. Buyers can use off-the-shelf segments or custom ones.

Dstillery first decoupled its audience data from its media buying in Q4 of 2017, when it made the data available on the Trade Desk. The data business gained traction through 2018, as Dstillery saw more pickup from verticals like financial services, retail and appliances.

“There was some concern before we decoupled our audiences from audience buying about whether or not they would perform as well on someone else’s bidder,” said SVP of strategy and development Evan Hills.

The company wanted to keep its proprietary data secure, Hills said, one concern about uploading its data into another platform. But mostly, “it was fear of the unknown” that prevented Dstillery from making the leap earlier.

The pain of the pivot

Dstillery had to make tough changes in its transformation into a data company.

Headcount decreased 25% over the past two years, to just under 100 today. But with a $5.9 million investment round in June, the company is hiring again and said it has 25 new positions yet to be filled across multiple business functions.

The business model also changed. As a data company, Dstillery charges a CPM fee to use its data, or calculates the cost as a percentage of media spend. It must pay a portion of that fee back to the DSP.

In its former life as a DSP, Dstillery charged a percent of the media it ran through the platform. Dstillery still uses this pricing model for clients that want both data and campaign execution.

“The data business has incredibly high margins,” Beebe said, higher than its DSP business. On the managed DSP side, Dstillery can sustain its existing margin despite using an external DSP because it doesn’t bear the cost of investing in its own platform.

However, shutting down the bidder deprives Dstillery of key bidstream data. Dstillery now licenses that data from a third party and combines it with a host of “licensed, partnered and bartered” data, as well as identity data to build audience segments, Hills said.

Becoming a company built on third-party data also means doubling down on an area receiving intense scrutiny from marketers, consumers and regulators.

“We think we are in good shape for CCPA [California Consumer Privacy Act] as it’s written today,” Hills said, though he noted the act is still a moving target.

“We view quality and accuracy as the larger problem,” he said, negatively affecting the reputation of third-party data. Dstillery doesn’t have that problem because it is transparent about data sources and how it creates data segments, which is a rarity in the third-party data market.

“By syndicating data to different platforms, and running them head to head against our peer set, we’ve seen categorically that our audience will outperform other audiences,” Hills said.

If Dstillery can pull off this pivot from DSP to data business, it will be the second time it moved out of a sinking advertising category. The company was founded in 2008 as an ad network named Media6Degrees, then became a DSP when programmatic disrupted the ad network model. Ad networks that didn’t adapt to programmatic largely went out of business.

Now the DSP business is entering rough waters as benefits accrue to the most scaled players. If other DSPs follow in its path, Dstillery may be the initiator of another trend: smaller DSPs that hitch their wagon to a larger DSP and stop bundling media with other tech, data or services.