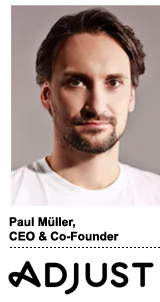 The recent bonanza of mobile M&A has more to do with the maturity of the market than it does with any defensive measures related to Apple’s new privacy features, according to Paul Müller, CEO and co-founder of mobile measurement company Adjust.

Müller knows a little something about M&A. He sold his company for roughly $1 billion to AppLovin in February, on the cusp of the latter’s IPO in mid-April.

Although the rules of the game – how tracking works and the data that’s available for measurement – are changing, there’s stability in the market in terms of the tools app developers and marketers need to do their job, Müller said.

“This happens in pretty much any market when it comes to software,” he said. “You start out with a million things, some of which work and some of which don’t, and the tools that do work combine themselves into more competitive networks.”

That’s the idea with the AppLovin-Adjust marriage, he said. Although Adjust remains a fully independent subsidiary, together they can offer a unified suite of tools for developers along with in-app bidding through MAX (which AppLovin acquired in 2018) and SDK management (which came through AppLovin’s acquisition of SafeDK the following year).

“Developers and marketers don’t want a whole mass of tooling,” Müller said. “They want their tools in one place.”

AdExchanger: What is your role now that Adjust is folded into AppLovin?

PAUL MÜLLER: I wouldn’t say “folded in,” because we’re not integrated or sharing any critical business functions. We’re a stand-alone company, and the value we provide in the market is as an independent provider of measurement.

But with AppLovin, we do have more insight into the full value chain, so we can see things we couldn’t before, which helps us build better products.

How would you respond to people who doubt Adjust’s ability to remain neutral as part of AppLovin, which has an ad network?

The math is simple. No one would spend so much money for a measurement partner whose core value is not neutrality. If we ever changed, the value of our company to AppLovin would be zero.

How has Adjust been adjusting its own offering to deal with the iOS 14 privacy changes?

We had to build SKAdNetwork integrations for all of the different versions – and there were a lot of them. We have technology to model the conversion value in SKAdNetwork, and the next step will be to try and connect conversion value, which is a short-term data point, to lifetime value.

We’re also doing a lot of work on predictive KPIs to extrapolate across users when we don’t have access to the same level of data. For example, collecting data from consented users and modeling it to a precision that is good enough to make decisions.

As in predictive enough. We know what the ROI is close enough so that UA managers can buy with arbitrage.

Have you noticed less effective measurement on Facebook post-iOS 14?

Well, what do you think will happen with Google’s ad ID?

Google is a partner of ours, too, and we have an NDA on future projects they’re working on. But I can say I’m very confident that Google, as a company that makes money with advertising, understands the importance of attribution and measurement and that they’ll account for their partners when they make any changes.

What exactly is the difference between fingerprinting and what Adjust calls “probabilistic attribution,” and do you think Apple will make that distinction?

I can’t speculate on Apple’s internal workings, but they’ve been pretty clear on what an SDK can and can’t do.

In the simplest terms, fingerprinting focuses on individual devices, while probabilistic attribution groups multiple devices together based on behavior. There’s a little secret sauce involved in terms of how you actually categorize and match devices without having to look at individual devices.

The data points we produce that way are, honestly, less precise – that’s just the nature of how this works – but you can still make good decisions based on the results.

We’re freshening up our UI and UX and working to integrate more things, including costs and spend, into a single dashboard together with revenue. And we’re looking into adding more automation.

We’re also starting to see a lot of mobile campaigns focused on connected TVs, and so we have a proof of concept with partners focused on CTV and mobile measurement. UA [user acquisition] managers want to try out new inventory where they can still address users, and CTV could be a huge opportunity.

And then there’s privacy. We’re adding something we call “explicit data residency” that guarantees the data from an SDK will only go to a certain region, which is very important for GDPR compliance. Other companies will say, “Just trust us, we’ll route it correctly,” but there’s no guarantee. We’re already running this with some beta clients and we’ll roll it out to more zones soon.

It’s the season of giving. What’s the one thing you wish Apple would add to SKAdNetwork?

Deferred deep linking. If Apple allowed for the continuity of a deep link when a user is in an app, that would be good not just from the marketer’s perspective but also for the end user’s experience. There’s a big disconnect there right now.