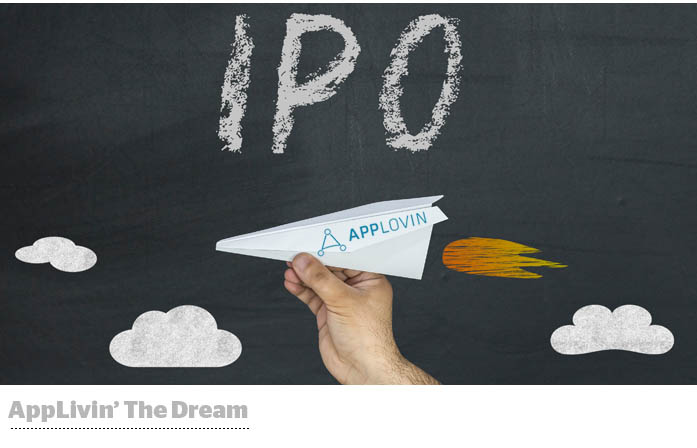 AppLovin is hoping to get some lovin’ from a white hot public market that’s been rewarding technology stocks with massive valuations.

The company announced its IPO on Thursday, offering 22.5 million shares at $80 a pop. Trading will begin on the Nasdaq under the ticker APP. (Update: Shares opened at $70, below the target, and fell into the $60s.)

The stock pricing values AppLovin, which filed its S-1 in early March, at $28.6 billion. That price is only slightly more than the $28.1 billion Facebook made in ad revenue during the last quarter of 2020 alone.

But the fast-growing $189 billion global app market is big enough for companies not named Facebook and Google to take a slice, especially if they have first-party data, including transaction data, AppLovin CEO and founder Adam Foroughi told AdExchanger.

“The first-party data we gather from our large-scale content business gives us a material advantage in the ecosystem,” Foroughi said. “It may not be a data advantage to Google or Facebook, but it definitely is compared with other companies.”

Because AppLovin has helped app developers with content distribution, it’s built “a walled garden around our ecosystem, which helps us deliver success for partners using the pieces we’ve put together,” he said.

AppLovin’s platform has evolved significantly since it was first founded in 2012 providing software for apps to promote themselves and acquire users.

Since 2018, AppLovin has published its own apps and helped developers publish theirs. Its app portfolio now contains more than 200 titles. AppLovin has also been buying up game IP like it’s going out of style, including PeopleFun, Belka Games and Machine Zone.

“We’ve got our own content, which gives us really powerful audience insights on hundreds of millions of monthly active users, and we can use that to feed our engine,” Foroughi said.

Although AppLovin is often likened to other mobile technology platform companies on the cusp of going public, like ironSource, or have recently done so, like Unity, a better comparison might actually be Netflix, he said.

“They take machine learning and their own user patterns and put it all into a recommendation engine that gives everyone great content, and then they invest in more original content,” Foroughi said. “Our platform has been able to grow by doing pretty much the same thing.”

Going forward, AppLovin plans to use its acquisition of Adjust to expand its reach beyond gaming apps to other app categories, including entertainment and utility apps.

“Games is a $100 billion business out of around $190 billion, and now the rest of that market is becoming addressable,” Foroughi said.

Wall Street is clearly excited about the size of that market, but do investors really understand the nuances of the app publishing, mobile user acquisition and monetization business?

“I don’t think most people understand the nuances of this space,” Foroughi said. “But what people do understand, and what we’re all seeing as humans, is that apps are the most accessible and engaging form of content that exists in the world … and there is so much potential to unlock there.”

But now for the really hard-hitting question: Was AppLovin actually named after the fake ID in the Superbad movie from 2007? (That’s been the rumor for a while.)

Sadly, the answer is no. The name AppLovin was actually inspired by a content discovery and organization company called BlogLovin.

“It was an $8 domain, it sounded okay, so we went with it,” Foroughi said. “I know it sounds goofy now, but we figured that we’d just focus on building a great company and executing on that … and, anyway, APP is a pretty good ticker.”

It’s been a long ride since the applovin.com domain cost less than ten bucks. Here’s more on AppLovin’s journey to get you up to speed: