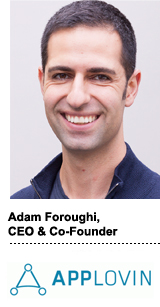 AppLovin is one of the most well-funded indie ad platforms out there – and it’s growing like a weed.

Originally, Orient Hontai had intended to acquire a majority stake in AppLovin. The deal was eventually blocked by US regulators.

As the government scrutinized the ill-fated deal, AppLovin focused on the business.

During the quiet period between when the potential acquisition was first announced in 2016 and when it was scuppered in November, AppLovin’s business “almost quadrupled,” said Adam Foroughi, AppLovin’s CEO and co-founder.

The company is on track to reach a $1 billion run rate within the next year.

“We scaled nicely despite the cloud of unknown hanging over the company,” Foroughi said. “And we’re still solving the same problem we set out to solve at the beginning: to help smaller developers get discovered.”

AdExchanger spoke with Foroughi about life after China, mobile video and what’s up with in-app header bidding.

AdExchanger: How has life changed since $841 million landed in the AppLovin bank account, and what are you doing with it?

ADAM FOROUGHI: The money was a mixture of capital for shareholders to get liquidity and for growth capital for the business. We’ve been profitable every year of our existence after the first one, but this helps us have strength on our balance sheet to become a bigger player in terms of acquisitions.

There was a transfer of money and then we all woke up the next day and got back to work. We’re arguably the largest independent mobile ad company right now. But we’re still working hard to accomplish what we started out to do, which is to support smaller companies that don’t have the same advantages as big companies do to market themselves.

Are you disappointed at all that the acquisition didn’t go through?

You know, the nice thing about a debt structure is that we’re operating the business exactly as we were and we don’t have any change of control on the board.

Mobile video has been a big investment area for AppLovin. How’s that panning out?

With video, you get anywhere between six seconds and a minute or more to convey a message and be super-compelling. And it’s not like a commercial that airs on TV. In an app, the user usually can’t skip. But what’s interesting is that, in a lot of cases, the user is actually requesting to see the video to get some benefit in the game they’re playing.

That content delivery mechanism is proving to have way better performance than almost any other avenue we’ve seen. That’s why video on our platform and in mobile apps has grown so much with companies that cater to and really care about performance.

Is mobile in-app video primarily rewarded or do some apps use it for branding?

It’s split. Around half of the inventory is rewarded, where the user requests to view and they have to watch the full commercial. The rest is pre-, mid- or post-roll or appears between the levels in a game. In both cases, the content is more engaging than something static.

But we believe everyone, whether they care about branding or they have a straight performance mindset, should be thinking about what we call “brand performance.” Even if you only care about eyeballs, you can still create an attribution model to measure performance.

Have the needs of small and medium-sized app publishers changed since AppLovin started in 2011, and how so?

Back then, the common issue was app discovery. You launched an app – and then what? For most developers, nothing. Our mission was always to help independent developers promote their content and to become a growth avenue for them in their business.

Nothing has changed in our model as we’ve scaled the business over the last six years, and that’s because this problem is just getting tougher and tougher for developers. App discovery is still hard.

How much of AppLovin’s business is programmatic?

We consider ourselves to be 100% programmatic, but mobile programmatic hasn’t yet grown the way we’ve seen on desktop, where you have SSPs and pipes into the agencies, sophisticated bidders, DMPs, header bidding – almost none of that stuff exists in the mobile app ecosystem yet.

Is that changing, especially with the move away from mediation to header bidding-like technology for apps?

There are a ton of platforms aiming to create a unified auction and go fully programmatic. But while there are some gains from a unified auction – what people are calling header bidding for mobile apps – there’s not as clear an economic incentive on mobile as there was on desktop or an obvious need to dramatically alter the technology, which was not built to handle programmatic.

But it all boils down to publishers wanting to make more money, and if something will do that for them, they’ll adopt it. Networks will need to adapt their technology and prove that a unified auction clearly makes the publisher more money than mediation. Then, we’ll see adoption.