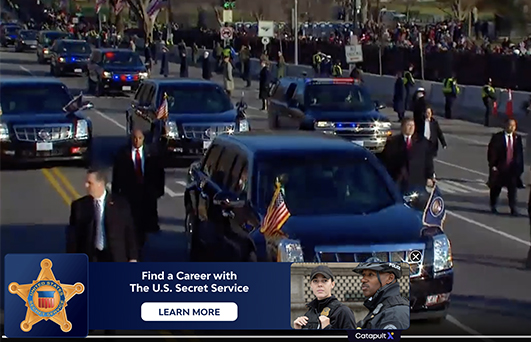 In October, the United States Secret Service launched a recruitment drive to more than double the number of its special agents and uniformed officers between the ages of 24 and 37.

The organization tapped its media agency, Atlanta-based JacobsEye, to run the campaign, which included pre-roll and mid-roll video ads on YouTube as well as search, social media and display, with more inclusive creative and targeting aimed at attracting more women and minorities.

But the initiative needed a boost – click-through rates for video were low at .07% to .08%, and JacobsEye wanted to increase visits and conversions to the Secret Service’s website.

As the budget became tighter – programmatic accounts for about 70% of ad spend – in the final quarters of the current fiscal year, JacobsEye wanted to make a big impact and get click-through rates up, while staying within its budget and remaining with its DSP, Zeta Global.

“We were looking for more traffic-driving strategies and tactics,” Tessa Sawyers, digital media manager at JacobsEye, told AdExchanger. “We also wanted to get [the client] excited again about something new.”

Its core product, On-Stream, launched last month and uses AI to identify “contextually relevant” moments during a video where advertisers and publishers can insert an ad within the content without disrupting the action.

For example, when soccer player Cristiano Ronaldo scores a goal, an ad to buy the player’s jersey appears on the screen without interrupting the game.

The tech uses about a dozen different creative overlay formats – for instance, in the bottom corner of the screen – that are less intrusive than pre-roll ads, which many viewers skip or block entirely, Co-Founder and CEO Zack Rosenberg told AdExchanger.

On-Stream connects to major DSPs and focuses on web, desktop, mobile and in-app video content (the company is also looking to make a push into CTV). Ads are currently being delivered across several hundred news, sports, gaming, culture and entertainment sites, such as WatchMojo and Black Enterprise. The company declined to name other publishers.

Because sports and gaming enthusiasts are ideal demographics for the Secret Service, JacobsEye shifted a portion of its budget to CatapultX’s On-Stream solution in May. CatapultX also doesn’t use cookies or personal information, which the agency also found appealing.

In one case, CatapultX identified a video of a soldier returning home to surprise their child during a sporting event, where it then ran a recruitment ad.

“We’re able to tie their message into something like that,” Rosenberg said. “We’re looking at moments in the videos that make sense, as opposed to just saying, hey, this site is about XYZ and therefore it’s a great fit. There is certainly military appreciation across sports sites, across music sites, across entertainment sites. They have a lot of content … that certainly could be a fit.”

Sawyers said the results were encouraging – the contextually focused ads drove a 160% increase in CTR compared to pre-roll.

“[The Secret Service] were really excited to try something new and innovative,” she said. “As we continue to see results come in and we’re working on budgets for fiscal year 2022, it’s likely we’ll have a higher percentage going toward On-Stream assets, from a click-through rate standpoint.”

CatapultX provides advertisers, like the Secret Service, with information about moments in a video that their DSPs can activate against, so their ads appear at correlated points within the content. Since CatapultX creates custom ad executions, it will use an advertiser’s existing assets to dynamically generate the ads.

Not all CatapultX ads immediately appear contextually relevant to the content it’s matching against.

For instance, during a WatchMojo video featuring comedian Dave Chapelle from 1993, ads for Reebok’s new Nano X1 trainers and Sonos audio products appeared when he began talking about his love of Montreal and hanging out in a Black community. Meanwhile, an episode of MojoTalks about football player Tom Brady featured the same ads.

During a video on Black Enterprise, ads for myFICO.com and a CrazyCap water bottle appeared around the time the host mentioned the program was sponsored by Wells Fargo.

Rosenberg said ads are delivered based on how the contextual targeting is set up in the advertiser’s DSP and keywords marketers want to be associated with, such as “running.” Additionally, brand research may show that viewers or fans (of, for example, Dave Chapelle) may be more likely to purchase those products. The targeting specifics are driven by the advertisers, he said.

“We don’t always necessarily know why an advertiser wants to be associated with a particular moment,” Rosenberg said. “There could be so many triggers that a human doesn’t correlate immediately but machines do.”

WatchMojo began testing CatapultX last year, drawn in by the tech’s privacy-safe design and focus on delivering a non-interruptive user experience, according to CEO Ashkan Karbasfrooshan. The video publisher is using CatapultX to create new programmatic inventory and monetization opportunities in conjunction with its pre-roll and display advertising.

“The ad landscape is moving away from [cookies]. Being in the contextual game is a good place to be,” Karbasfrooshan said, adding that audiences are “accustomed” to the user experience of ad overlays on content – especially if it’s contextually relevant.