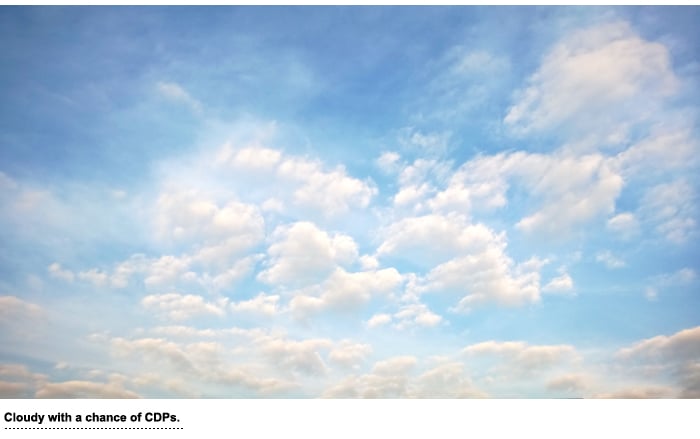 Over half (52%) of marketers say that they use Salesforce or Microsoft as their customer data platform, according to the most recent Advertiser Perceptions report on the CDP market.

Clear evidence that the marketing clouds are dominating the CDP category … right?

Here are a few grains of salt. For one, when Advertiser Perceptions conducted its research in Q3 of last year, Salesforce had yet to make its CDP generally available. That didn’t happen until October. Before then, advertisers just thought they were using it because Salesforce spent well over a year ballyhooing the arrival of its forthcoming CDP offering.

On top of that, the nomenclature that Salesforce and Microsoft use for their respective CDPs – Customer 360 Audiences and Dynamics 365 Customer Insights, respectively – is so similar that it’s entirely possible advertisers conflated the two products when they were asked about them.

“Part of it has to do with the fact that this is a nascent market,” said Stu Schneiderman, SVP of business intelligence at Advertiser Perceptions. “But it’s also because independent CDPs just haven’t done enough marketing and education.”

If independent CDPs don’t do a better job of differentiating themselves both from the marketing clouds and from each other, the clouds will keep on grabbing the lion’s share of mindshare.

The vast majority of marketers say they are either “very familiar” or “somewhat familiar” with marketing cloud CDPs, including 89% for Salesforce, 88% for Microsoft, 87% apiece for Oracle and Adobe and 75% for SAP.

But it’s a much different – nearly inverted – Top 10 list, when marketers are asked about their level of satisfaction with CDPs that they’ve either tested or used.

While 70% of marketers said that they were satisfied with Microsoft and 65% with Salesforce, 75% said that they were pleased with ActionIQ, 68% with AgilOne and 66% with Tealium. Amperity and mParticle – the two independent CDPs that marketers say they’re the least familiar with – also have healthy satisfaction rates, at 68% and 69%.

It’s “a tale of two cities,” Schneiderman said, “[with] little consistency from market perception to traction.”

“Look at market traction, and it’s all about the biggest clouds,” he said. “But when you get into the criteria and into how they perform, it’s the rise of the indies.”

The dynamic that’s playing out in the CDP space right now is not all that dissimilar from what’s been happening in the DSP and SSP markets, where big names lead with guest appearances by a few independent standouts.

Fast forward a year or two, and the most likely scenario to play out will be that a few of the marketing clouds will end up delivering on their CDP promise trailed by two or three indie CDPs that rise to the top, said Kevin Mannion, president and chief strategy officer at Advertiser Perceptions.

It’ll remain hard for the indies to break in, though.

Marketers who feel overwhelmed by the category, unsure of how to proceed – classic symptoms of FUD (fear, uncertainty and doubt) – and/or already have a preexisting relationship with one of the marketing clouds will probably continue gravitating toward the familiar, Schneiderman said.

“If an advertiser is an Adobe shop, for example, it’s hard for them to go elsewhere,” he said. “They might evaluate other platforms, they might have mixed feelings because they know that there’s something out there that’s probably better for them – and yet at the same time they’re already so tied into a marketing cloud from an implementation standpoint and an activation standpoint.”

DMPs in the dumps

But regardless of who the winners and losers wind up being in the CDP category, there’s drama playing out in another sector of the market. Data management platforms are in trouble, Mannion said.

According to Advertiser Perceptions, marketers say it’s the technology they’re most likely to phase out in favor of a CDP, a higher rip-out rate than either ERP software, data warehouses or data lakes.

The perceived importance of DMPs has markedly declined between the first Advertiser Perception report on the CDP category in Dec. 2019 and the second in June of last year.

In June 2020, 35% of marketers said that their DMP had become “more important” since onboarding a CDP, down from 59% the previous winter.

And when asked if their DMP had become “less important” after bringing on a CDP? No respondents said “yes” in Dec. 2019, compared with 12% just six months later, yet another sign that the rise of CDP technology is occurring as DMP technology falls out of favor.