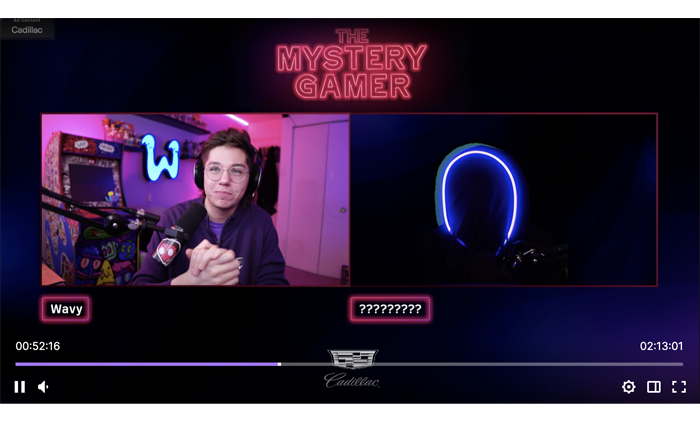 When Cadillac put together a marketing strategy for its 2021 Escalade last year, gaming bubbled up as a place where the brand needed to play.

“All of our research into current and future Escalade owners shows gaming as popping up pretty high from an index perspective,” said Marcie Pérez, associate director of media and performance marketing at Cadillac.

But Cadillac wanted to do something more engaging than a typical sponsorship, Pérez said. And so, over three nights in November, Cadillac partnered with Twitch to host a series of livestreams featuring up-and-coming gaming influencers playing “Fall Guys: Ultimate Knockout” with big-name gamers whose faces would only be revealed mid-stream based on guesses coming in from the audience.

Engagement with the streams exceeded Twitch’s internal benchmarks, Pérez said, and serves as evidence that gaming is “where we need to be as we lean into our future target audience.”

AdExchanger: Why does a streaming platform like Twitch make sense for a brand like Cadillac, which isn’t endemic to the gaming space?

PEREZ: Cars and video games just go together in general, but we also know that our audience indexes highly in gaming. And given the pandemic, there’s been an increase in gaming hours spent as a source of both relaxation and entertainment.

What’s your strategy for marketing to a gaming audience?

What some marketers do wrong is that they try it once and if they don’t see immediate results, they leave. But we’re going to keep on trying to find new ways to reinvent ourselves in this space, to come up with new ideas and partnerships so we can build a meaningful relationship with the gaming community.

One way you’re doing that is through gaming influencers. How do you make sure the content they post and create is brand safe?

We didn’t feed our influencers anything about the Twitch Mystery Gamer series. It’s critical to us that we’re working with them in an authentic way and that they’re posting in their own words. But part of our agreement with them is that they obviously shouldn’t use vulgar language or hate speech or anything like that. Of course, though, we also don’t force them to say, “I love Cadillac.” We have a level of agreement and understanding going into the partnership about behavior.

What are your KPIs for something like the Mystery Gamer series?

Because it was live streamed, we could look at the number of video views. We also looked at the social postings our influencers were making related to the series, both in terms of reach and engagement with the posts. We measured how different gamers’ content performed against each other so we could see what types of games and which gamers resonate most with Cadillac.

This was mainly an awareness play, though. We didn’t measure the path to purchase. But we did implement surveys about our media buys to get consumer feedback on whether people remembered seeing Cadillac and what they think of our brand.

Are you planning to partner with any other gaming platforms?

I can’t get into the specifics, but we are working on other partnerships and we’re going to continue focusing on gaming in the future, especially as we get our EV [electronic vehicle] marketing strategy moving this year.

Gaming is where we need to be as consumers age up. Eventually, these audiences will buy a vehicle and we want to make sure they’re aware of us. We might not be their first vehicle, but we could be their ideal one, something to work towards. Building familiarity with our brand among this audience is critical for our future success.

Do you also advertise in video games?

In-game video advertising is also something we’re exploring and there are a few vendors we’re in contact with. Of course it depends on whether you’re advertising in a mobile game or doing a more structured thing in Fortnite or Call of Duty, say, but I can say that we’re trying to find the right fit for us.

What about esports? Does it have a place in Cadillac’s marketing strategy?

Actually, esports popped up even higher for us than gaming as indexing high for our audience. We just didn’t have the right esports opportunity at the time we wanted it. But we’re working on how to get into that space, and it’s definitely on our radar as something we want to participate in.

Was it hard to get buy-in from senior stakeholders to pursue a gaming-focused strategy for the Escalade launch?

Our senior leadership are not gamers, but they were intrigued by the idea and they were excited about the success of the Twitch activation. It opened their eyes to gaming as an option to reach our target consumer.

We didn’t necessarily need their approval, but we did need to explain it, just so that they could understand our rationale and our thinking. We shared data to back up the fact that this isn’t just an idea – we have real audience insights here that make it clear we have an opportunity in gaming.