Because user-level measurement isn’t possible without a device ID – and with ATT opt-in rates at less than 50% – SKAdNetwork suddenly became the primary mechanism for measuring and optimizing ads on iOS.

Problem was … it was barely functional.

Previous iterations of SKAdNetwork lacked support for web-to-app campaigns, provided just one single anonymized postback per app per user and put strict, intractable limits on how many campaign values (aka two-digit campaign IDs) an advertiser could track (just 100 per app per ad network).

But SKAdNetwork 4.0 fixes that issue and introduces several other new features that make the API a lot more usable.

Although “a lot more usable” doesn’t mean there isn’t room for improvement, said Alex Bauer, head of product and market strategy at Branch.

“But at least it’s not actively painful anymore,” he said.

Apple announced four new additions and tweaks to SKAdNetwork 4.0, which is slated for release later this year.

The new version will most likely hit the scene after iOS 16 comes out sometime this autumn, but Apple hasn’t confirmed that.

The first bit of newness is something advertisers have been requesting from the beginning: the ability to attribute web-to-app user flows.

Until now, advertisers could track app-to-app and app-to-web campaigns through SKAdNetwork (and purely web-based customer journeys through Apple’s Private Click Measurement solution for Safari). But advertisers looking to track users who were directed to the App Store after clicking on a mobile web display ad, for example, were out of luck.

Next up, advertisers will be able to receive postbacks for multiple conversion windows, meaning they can get more insight into how a person engages with an app over time after it’s been installed.

One of the most frustrating aspects of SKAdNetwork 3.0 is that advertisers can only get one postback per advertised app, which only (sort of) works for the most simplistic of conversion funnels.

The single postback advertisers get from the current version of SKAdNetwork contains a limited amount of information about a conversion: the campaign ID, the source app (but only if both apps have permission to track users) and the conversion value, a mechanism for tracking post-install engagement that’s beholden to a resettable countdown timer governed by confusing logic. The conversion reporting is delayed using a random timer.

What’s changing with version 4.0 is that advertisers will now get three postbacks: one within the first two days of an install, another within three to seven days and a third that can arrive anywhere between eight and 35 days after the initial install. 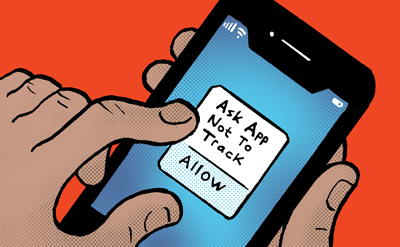 You can think of these multiple postbacks as three circumscribed attribution windows that are no longer tied to a complex (and inscrutable) timing mechanism.

But it’s important to note that there’s no way to connect these postbacks to an individual – and there probably won’t ever be.

“Grouping postbacks together is a wish list item, but I can also see why Apple wouldn’t ever allow this,” Bauer said. “If you have three different signals, it could be enough for you to start backing into an understanding of a single user.”

The final two additions to SKAdNetwork 4.0 are both designed to let advertisers track more stuff without encroaching on user privacy.

In the current version of SKAdNetwork, an app can only share a conversion value tied to a post-install engagement that corresponds to a six-bit number with values between zero and 63 during a 24-hour window. This window expires and renews itself with every subsequent call of the SKAdNetwork API (if the call is for a higher value than the previous conversion value). If the campaign doesn’t meet the (unknown) privacy threshold within that brief window of time, the API will withhold certain parameters, such as conversion value and source app.  (Apple has never shared what exactly the private threshold is or whether it’s static or dynamic.)

But SKAdNetwork 4.0 introduces a new concept called hierarchical conversion values that ensures advertisers will get at least some data back even if their campaign generates too few installs to meet the privacy threshold.

Hierarchical conversion values will come in two flavors: coarse-grained (which is further split into three buckets: low, medium and high levels of crowd anonymity, each of which comes with its own privacy threshold) and fine-grained value (which is the same thing as conversion value today).

The number of conversion values an advertiser can see will depend on which group a campaign falls into based on the number of installs it generates.

“Rather than being all or nothing, it’s more like ‘some,’ ‘more’ or ‘everything,’” Bauer said.

Although even the coarse-grained option requires medium-level crowd anonymity, he said, “if you pass the right privacy threshold, SKAdNetwork will replace coarse-grained with fine-grained values.”

Last up, Apple will replace the two-digit Campaign ID field in SKAdNetwork, previously limited to 100 IDs per network, with a configurable hierarchical source identifier field that lets advertisers add more tracking parameters, including ad placement and creative type. Apple is also upping the number of campaign IDs on offer in certain circumstances.

Crowd anonymity is the term Apple uses to refer to the privacy-focused way SKAdNetwork delivers attribution data. When the install count is low, the API limits the amount of trackable info that gets sent back. But the more users there are – and therefore the more difficult it is to identity a unique user – the more data Apple sends back. 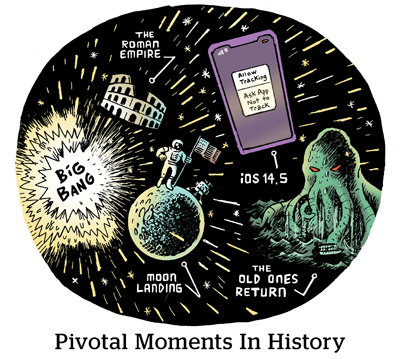 The industry has mixed reactions to Apple’s seeming largesse.

Although these four additions to SKAdNetwork 4.0 were based on feedback Apple solicited from the mobile ad industry, the fact remains that Apple didn’t consult the industry before developing SKAdNetwork in the first place, which would have led to far less confusion and agita.

“Arguably, if Apple had done some market research before the first version, they could have learned the right way to approach this,” Bauer said. “Instead, it took two years to get there, which is unfortunate.”

“While we wished to see these improvements being released much earlier, they are a great step forward for the entire ecosystem,” said Oren Kaniel, CEO and co-founder of AppsFlyer.

Jake Moskowitz, VP of data strategy at Emodo, is a little more skeptical. Although Apple’s plans for SKAdNetwork appear to be an effort to “make up for some of the limitations of the initial version,” he said, it’s important to wait and see how it actually works after launch.

But Mike Woosley, COO of Lotame, is having none of it. “Apple is going to give developers more information but, unfortunately, no tools to do anything about it,” he said. “Those are reserved for Apple.”

Be that as it may, developers and mobile measurement providers need to use SKAdNetwork if they want to attribute most installs on iOS – and they’ve got a few more requests for the next version, if Apple is listening.

At the MAU event in Las Vegas in early June, one mobile ad tech exec who spoke with AdExchanger expressed a desire for an additional 60-day attribution window on top of the new 35-day option, and access to more real-time data. Oh, and why not throw in a few more conversion values while you’re at it, Apple.

Another nice-to-have: Although addressing web-to-app attribution is a big deal, SKAdNetwork completely ignores attribution for any conversion that isn’t an install, Bauer said.

“Right now, there is no way to include inputs for anything that isn’t an ad, but an ad might not be the thing that deserves last-touch credit,” he said. “It would be good if Apple would consider support for other types of marketing.”

But Kaniel noted that SKAdNetwork’s focus on user-level anonymization is also one of its limitations and suggested that it’s time for the industry to move toward more aggregated insights, which makes sense as a stance, since AppsFlyer, on trend, recently released its own data clean room product for app developers.

We believe there are additional aggregative solutions that can introduce significant measurement improvement, such as exact LTV and ROI,” Kaniel said, “while preserving the same, or even better level of privacy compared to individual user-level anonymization.”