The word “cookieless” crops up in virtually every conversation about the future of online identity.

But what exactly do people mean when they say “cookieless”?

Although the definition seems simple enough – the absence of cookies – it lacks the nuance to encompass the true complexity of signal loss.

Although the term is often used as an imprecise shorthand for signal loss, specifically the end of third-party cookies, “cookieless” is not only technically incorrect much of the time; it tends to confuse and obfuscate.

And when used as a marketing term – “This solution is cookieless!” – it begs for follow-up questions.

Perhaps the most practical way to define cookieless going forward is any solution that helps marketers become less reliant on third-party cookies, which are dropped by sites that have a different domain than the one a user is visiting.

But “cookieless” is also problematic because it focuses the conversation too intently on Google’s planned phaseout of third-party cookies in Chrome – ignoring the fact that signal loss is happening across multiple channels (and has been for years).

“Something like ‘ID-less’ would be a much better word than ‘cookieless,’” said Mathieu Roche, CEO and co-founder of identity company ID5. “What we really should be talking about here is a global phenomenon tied to cross-site tracking, which also involves mobile ad IDs, not just cookies.” 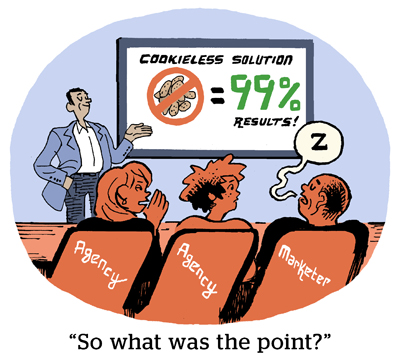 The throng of vendors pitching their so-called cookieless solutions – with some claiming not to rely on cookies at all – is partially responsible for muddying the waters.

A word to the wise: Although vendors might say their technology is “cookieless,” that should not be viewed as a sign that their product solves for signal loss.

Some people are getting a little fed up with vendors using sloppy language:

You better get some gloves.

“There’s a lot of marketing BS out there, people saying things like, ‘We’ve got this covered, we’re cookieless and we’re first-party data only,’ or whatever, which makes absolutely no sense,” said Liane Nadeau, SVP and head of media investments at Digitas North America.

But the fact is the term cookieless has already entered the ad tech lexicon, which means it’s time for the industry to at least try and standardize on a definition.

One thing that could help dispel the confusion would be if we all stopped referring to the “cookieless future.”

A lot of the web inventory out there is already cookieless today.

Firefox and Safari have been blocking third-party cookies by default (and restricting the lifespan of first-party cookies) for years.

“Depending on the browser they use, some people already live in a cookieless world, so it’s really the cookieless present,” said Chip Malt, CEO and cofounder of Made In, an ecommerce-based DTC cookware manufacturer. 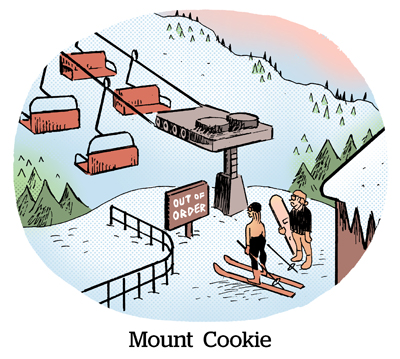 Together, Safari and Firefox account for nearly 20% of the web browser market, according to recent estimates from StatCounter. That’s far less than Chrome’s roughly 65% market share globally, but still represents a meaningful chunk of traffic that is non-addressable right now.

Which is why, regardless of what Google does, it makes sense for marketers, tech platforms and publishers to run tests in existing third-party cookie-free zones, with the added benefit of helping them prepare for the end of third-party cookies in Chrome.

“This isn’t even about getting an early mover advantage anymore,” Nadeau said. “Brands that don’t start testing more durable solutions now are already missing out on a large percentage of audiences – they’re already late.”

But many advertisers and publishers are dragging their feet because – especially following Google’s deadline extension – they feel like they have more time than they really do to get ready for what feels like an abstract cookieless hereafter.

Although hey, who knows, maybe putting a more positive spin on signal loss could help spur them to action.