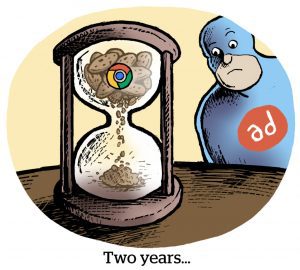 Are you having fun in the sandbox?

I hope so, because it’s going to be awhile.

Google‘s plan to deprecate third-party cookies by Q2 2022 will be delayed by almost two years, so publishers, advertisers and web developers have time to test and build feasible alternatives, the company announced in a blog post on Thursday.

The additional time will also include a six-month period when any changes to third-party cookies will be evaluated by the U.K. Competition and Markets Authority (CMA), the British antitrust agency.

On the one hand, news of Chrome’s delay in killing off third-party cookies is a shock: Ad tech companies and publishers have been working in overdrive to transition away from third-party identifiers and to adapt to Google’s Privacy Sandbox in time for change next year. Agencies have also pressed brand clients to onboard new identity vendors and cookieless targeting technology, with a sense of urgency driven by Google’s deadline.

Some in the industry may not be surprised to hear that Google is delaying the policy change. The FLEDGE trials – early tests of some Privacy Sandbox proposals – have been delayed as well, until late this year or early next. That wouldn’t leave much time for the CMA to approve changes and for developers to adopt new privacy technology.

Google has delayed other privacy policy moves as well. It was expected to integrate with the IAB Europe’s Transparency and Consent Framework, the industry’s mechanism for conveying consent signals in the bidstream to comply with GDPR, in 2018. That also took an extra two years.

Google must move slowly, since it faces regulatory scrutiny regardless of its decision – either it faces privacy challenges stemming from third-party cookie tracking or antitrust scrutiny because removing cookies will undercut independent publishers and ad tech.

“We must take time to evaluate the new technologies, gather feedback and iterate to ensure they meet our goals for both privacy and performance,” wrote Chrome’s director of privacy engineering, Vinay Goel, in the blog post.

Unlike its largest browser competitor Safari, Google must account for “performance” for advertisers and publishers, not just focus on privacy.

“This is important to avoid jeopardizing the business models of many web publishers which support freely available content,” according to Goel.

The new timeline for third-party cookie deprecation starts with a first stage in late 2022, when Chrome will test Privacy Sandbox features and monitor for industry adoption. That stage is expected to last nine months.

That is also when the CMA will evaluate Chrome’s cookie changes.

If the Privacy Sandbox features are adopted by publishers and developers, and Google gets the go-ahead from the CMA, then Chrome will move to Stage 2: a three-month period when the browser will phase out third-party cookies.

Third-party cookies won’t disappear like a flip of the switch. Instead, think of it as a slow dimmer.

Right now, third-party cookies can be set for as short as a session (meaning they’re deleted whenever the user closes the browser) or for more than a year in some cases. During the three-month period when Chrome phases out third-party cookies, it will do so by gradually shortening the maximum duration of third-party cookies from months to weeks to days. By the end of stage two, they’ll have dwindled to nothing.

Google said it will soon release a more specific schedule for the Privacy Sandbox rollout.

Though many developers, advertisers and publishers will be asking themselves, “Is this really a deadline?”

“That happens when it happens,” said Google Ads GM Jerry Dischler about removing third-party cookies on the AdExchanger Talks podcast in August of last year. “But we don’t want to leave it open-ended so we’ve announced a date in order to create a sense of urgency.”

It may be hard to generate urgency, if the ecosystem expects delays.