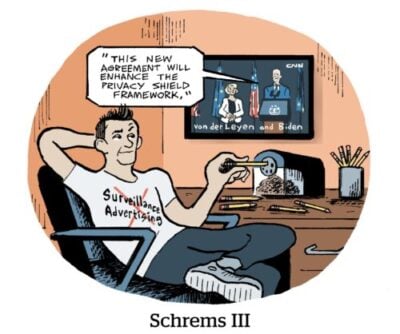 One of the myriad sticking points standing in the way of a US federal privacy law is the question of whether people will be able to sue tech companies in open court.

Terms of service often stipulate that signatories give up their right to sue and must instead seek arbitration – which is confidential and tends to favor businesses, Bloomberg reports.

Sen. Maria Cantwell (D-Wash.), chair of the Senate Committee on Commerce, Science, and Transportation, is all in favor of a private right of action, but she’s willing to compromise. Cantwell proposes limiting suits to cases of “substantial privacy harm,” meaning harm to an individual worth $1,000 or more.

But regardless of what it says in a company’s terms of services, consumers often sue over misleading claims – despite being bound to arbitration.

The Chamber of Commerce, which supports arbitration (duh), warned leaders against the practice, arguing it would lead to abusive lawsuits.

The term “abusive lawsuit” is open to interpretation. Over in Europe, where individuals can sue businesses, one such individual, Max Schrems, has won high-profile suits against Big Tech that have been more consequential than every monetary fine ever levied against Meta, Alphabet, Apple and Microsoft together.

Apple laid the groundwork to snuff out mobile fingerprinting at its Worldwide Developers Conference in 2020.

But here we are, two years later with WWDC 2022 around the corner, and the practice – whereby companies combine data points such as IP address, operating system version and device model to identify an individual – is still rampant on iOS. Most companies don’t even hide that they’re doing it, writes Eric Seufert at Mobile Dev Memo.

“Fingerprinting is a privacy nightmare, and it is a crutch that disincentivizes the ad tech ecosystem from making investments into measurement and attribution solutions that embrace the new privacy landscape,” he writes.

But if it’s so egregious and so out in the open, why hasn’t Apple turned the screws on companies that fingerprint users?

Seufert posits that Apple doesn’t care because the kind of “fingerprints” used to confirm app installs, like matching device data, including battery status and screen orientation, isn’t a persistent ID. This type of fingerprinting can confirm that an ad was served to a device, which later downloaded an app, but can’t be turned into a durable identifier.

Of course, there’s no telling whether Apple will eventually crack the whip, but it looks like the losers here are all those app developers that took Apple at its word when it said SKAdNetwork would be the only way to measure iOS install conversions after the rollout of ATT.

Knoll is now the new CEO of SMI.

Dreamscape has been fairly quiet since 2020, when GTCR launched the unit with the three programmatic vets. But that changed last month when Dreamscape staked an investment in SQAD, a campaign forecasting and analytics provider.

These sorts of tie-ups are on trend.

Similarly, meet Similarweb, which provides aggregate market reports on web traffic, also with a focus on competitive intel. Similarweb IPO’d last year and has since acquired Embee Mobile, an in-app and programmatic survey-based market research company, and Rank Ranger, which scores and rates businesses based on search results.

Google warns every Canadian legislator not to fast track a bill that would force it to pay publishers for news content in search results. (Haven’t we heard this before?)  [Global News]

Netflix slips and Hollywood cheers. But maybe it shouldn’t. [Vox]

The industry questions the value of SPACs after high-profile face-plants at BuzzFeed and Forbes. [Digiday]