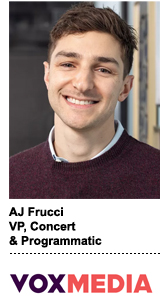 This year, Vox expects that the majority of its audience line items will be rooted in first party, said AJ Frucci, VP of Concert and programmatic at Vox Media.

Last year, third-party targeting made up the vast majority, he said, and first party was “just a small fraction.”

Concert, Vox’s programmatic ad marketplace, is a big part of why. Advertisers using Concert are able to buy ads across Vox-owned sites, including Curbed, Eater and Grub Street, and through Vox’s publisher partners, such as NBCUniveral, Penske Media, Condé Nast, BuzzFeed and Hearst Newspapers, using first-party audience data from Vox.

But how’re the CPMs?

AdExchanger: What’s been the mood among advertisers since March?


AJ FRUCCI: Advertisers have a newfound commitment to the value of trusted environments and they also want more assurance and control, not just about the quality of the places where their ads show up but also the quality of the companies getting their money. Brands want to feel good about the nutritional value, if you will, of their marketing mix.

They also want to be more agile, flexible and to move faster, which means we’ve seen shorter planning cycles in the second half of the year. On top of that, they want a direct and meaningful relationship with an audience, rather than just scale, especially given the uncertainty around data with the coming cookie apocalypse. And so we’re leaning more heavily into first-party data.

Concert recently launched its own self-serve platform. What was the rationale?

Concert is a significant growth area for us and it’s one of the drivers that’s helped us be in a relatively good place during the pandemic. With Concert Ad Manager we wanted to create an alternative for advertisers of all sizes so that they could also have access to top-tier publisher inventory in a brand safe environment.

It’s difficult given the average budget to justify standing up dozens of independent publisher buys, each with their own native and creative experiences, which is why platforms like Facebook, Google and Amazon will continue to have their core place in the marketing mix for all advertisers.

But there is also a place for the open web, and Concert provides a centralized point of access.

What kind of uptake have you had for Concert?

We’ve seen mid-double digit percentage growth year over year during the second half of the year. It’s been in line with the major platforms in terms of growth. We really believe that Concert can be a centralized open alternative that competes on reach, trust and contextual relevance. Because of that, we’ve seen higher demand and it’s forced us, in a positive way, to think about our road map more urgently.

One is our investment in Concert Ad Manager, but we also invested in new contextual channels, with Concert Local being the biggest of those. In 2021, we’ll focus on growing supply. We’re also going to develop new creative solutions.

What is Concert Local?

It’s a marketplace that we’d been developing since the second half of 2019 which launched in May – and given what was happening in the world at the time, it was a very timely solution.

Concert Local brings together trusted local news and lifestyle publishers into a single marketplace that serves as a centralized entry point for national advertisers to advertise locally at scale.

How is Vox diversifying its revenue beyond advertising?

Commerce is definitely a core growth area for us, especially with The Strategist, which is the New York Magazine shopping site we got after the merger with New York Media. Our ecommerce revenue is up mid-double digits today from a year ago as a result of the ongoing pandemic. We’re doing daily deals and increasing our newsletter presence throughout the holidays.

A lot of our brand commerce revenue is through affiliate links, but we’re using sites like The Strategist as a testing ground to expand our commerce footprint into other media networks.

We also use commerce signals as part of our first-party data strategy to understand what types of behavior patterns and environments lead a person to click. An affiliate link that drives to a purchase helps us know our audience better so we can serve better content and ad experiences.

What else is Vox doing to take advantage of first-party data?

We have Forte, which is the first-party data platform we launched this year. The value is that it combines all of the different touch points we have with our audience: context, registered users, subscribers, metadata around creative. We can also use intent signals, like entry point, scroll depth, user journey and device type. Together, these create a sophisticated picture of the user’s mindset and it drives outcomes for us.

Earlier in the year, to be totally candid, we felt like it was a bit early in terms of the conversions we were having with marketers about this. They were just starting to think about the deprecation of third-party cookies.

But over the course of the year, we’ve seen a lot more openness. Now they come to the table to talk about our first-party data solutions.