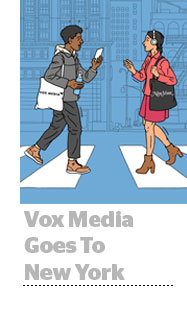 Vox Media and New York Media are merging to create a portfolio of brands so they can better compete against platforms and build diversified businesses at scale, the companies announced Tuesday.

“The conversations we have with marketers every day are about the engagement around our brands, scale and performance,” Vox Media Chief Revenue Officer Ryan Pauley told AdExchanger. “This [merger] objectively increases our value in each of those areas.”

The increased scale and breadth of content will expand the set of brands that could work with Vox Media.

“There isn’t a brand in the world we can’t…have a conversation with,” Pauley said.

Both companies have diversified content brands, and each has taken steps to expand their revenue streams. New York Media is further along in commerce and digital subscriptions, while Vox Media is more advanced in programmatic, podcasts and TV content production, Pauley said.

New York Media made its first programmatic hire just a year ago, when it brought on Jeremy Fass. In comparison, Vox Media has spent five years building its programmatic business. It also operates Concert, an ad network that runs across premium content sites with high-impact ad units.

New York Media was already part of Concert, so that piece of integration work has already been done.

New York Media had a breakout hit in The Strategist, its commerce-related brand that drove $100 million in purchases last year. Post-merger, New York Media CEO Pam Wasserstein will assume a role of president at Vox Media and share its expertise with more Vox Media brands.

Vox Media is just starting out in commerce. The Verge drove $10 million in sales for Amazon Prime Day this year, but it still focuses on tentpole events like Black Friday over an always-on tech recommendation strategy. In addition to expanding The Verge’s commerce efforts, gaming site Polygon and food site Eater could create “natural” shopping opportunities, Pauley said.

Vox Media runs 175 podcasts, while New York Media only has a handful, the most popular being The Cut on Tuesdays, which is currently produced by Gimlet Media. New York Media could potentially expand there.

And Vox Media’s studio division, run my Marty Moe, created the show “Explained” on Netflix and struck a multiproject deal with Hulu. New York Media can now be added to that content creation pipeline.

New York Media had been losing money – reports say as much as $10 million a year – though Bankoff told CNBC that those losses had stabilized recently. Meanwhile, Vox Media turned a small profit on $185 million in revenue last year, The New York Times reported.

Assembling a portfolio of digital media brands feels similar to what industry stalwarts like Meredith, Condé Nast and Hearst have done in order to amass a large audience, hedge against one brand rising or falling in popularity and reduce back office costs.

The most important part of this model is the brands, Pauley said“What we know to be true is that brands matter, and the ability to develop and grow brands that have a differentiated relationship with an audience works for consumers and marketers.”