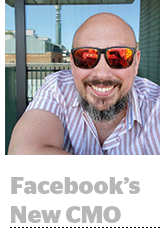 Somebody’s Gotta Do It

Facebook has a new CMO. Following the departure of Antonio Lucio last month, Facebook is promoting from within. Alex Schultz, one of Facebook’s longest-tenured product and data executives – he’s been with FB since 2007 – is taking over the role, Bloomberg reports. Schultz isn’t your typical choice for CMO. His background has more to do with running DR campaigns and user growth initiatives than traditional marketing, but Bloomberg points out that his appointment could signal Facebook taking a more analytical approach to promoting its products. Regardless of the approach, though, Schultz has his work cut out for him. Facebook was recently ranked as the least trustworthy digital platform by consumers, according to Insider Intelligence. Related: Facebook says it has gotten better at fighting disinformation since 2016. Biden’s campaign says the opposite is true.

The walled gardens have self-serve ad tools, so why not publishers? On Tuesday, Vox Media rolled out a self-serve version of its Concert ad marketplace so that brands, particularly small and medium-sized businesses, can build their own campaigns and have more flexibility and control over where their ads show up. Vox and NBCUniversal first launched Concert in 2016 as a brand-friendly ad network, and alternative to the growing dominance of Facebook, Google, et al. Concert Ad Manager will include inventory across NBCU, Penske Media and Quartz, as well as more local and regional publishers, such as The Boston Globe, Chicago Sun-Times and Texas Monthly. “Until now, scaled access to top-tier publisher environments has been inaccessible to the vast majority of marketers,” said AJ Frucci, VP of programmatic advertising and head of Concert. Read on.

Verizon has been quietly trying to offload HuffPost, one of the assets that came along as part of its $4.4 billion acquisition of AOL in 2015, the New York Post scoops. According to sources close to the situation, Verizon has approached multiple digital media companies over the past few months to try and get the site, which has been posting losses, off of its books. Verizon has pitched everyone and their mother – err, everyone and their son, rather. In addition to Penske Media Group, Bustle and J2 Global, Verizon has reportedly pitched the property to Group Nine Media, whose CEO is Ben Lerer, son of original Huffington Post co-founder Ken Lerer. Ben didn’t bite. “This thing loses too much money,” an in-the-know digital media exec told the New York Post. “It’s such a mess, I wouldn’t touch it with a 10-foot pole.” Oof. Although HuffPost brings in between $45 million to $50 million a year, its annual expenses are somewhere between $60 million and $70 million. This year, due to the pandemic hammering ad sales, it’ll probably only bring in around $40 million in revenue.