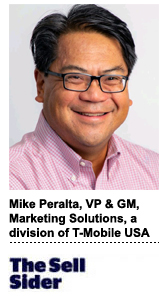 Today’s column is written by Mike Peralta, VP and GM of Marketing Solutions, a division of T-Mobile USA.

In the latest example of this trend, Microsoft announced two blockbuster deals that pair ad tech with gaming content. In December, the company shared plans to acquire Xandr, AT&T’s data and analytics platform. And just two week ago, Microsoft announced it’s acquiring Activision Blizzard, the publisher behind Call of Duty and World of Warcraft, for a whopping $68 billion.

But Microsoft isn’t the first to take this approach. In fact, it’s following in the footsteps of gaming and software giants, including AppLovin, ironSource and Zynga. What’s the strategy behind the move? First-party data.

First-party data is the future of advertising, taking the place of outdated cookie-based tech. In previous years, ad platforms have failed to find a way to fully leverage the power of this data. But today, companies are putting it at the center of their strategies. And M&A is helping to fuel it.

In 2018, AppLovin raised $400 million from private equity firm KKR at a valuation of $2 billion, using those funds to transform itself from an advertising platform into a mobile gaming powerhouse. Today, AppLovin has a market cap of nearly $32 billion.

To get there, they made a slew of smart ad tech acquisitions: first, MAX, an in-app bidding solution. Then SafeDK, an SDK management tool that helps mobile app publishers automate security and brand safety. Then Adjust, a mobile advertising measurement and attribution company. And, most recently, MoPub, one of the largest in-app ad exchanges on the market.

But wait, there’s more. In 2021, Zynga, the leading global game developer, acquired Chartboost, an in-app monetization platform with a widely used SDK. And other up-and-coming players, like Media and Games Invest (MGI), continue to leverage M&A to turbocharge the content and platform growth strategy.

Through these acquisitions, companies like AppLovin, ironSource and Zynga can tap first-party data from their in-house mobile games, add more first-party data via their monetization SDK integrations, then use those two sets of data to refine and scale both businesses: the gaming side and the media side.

For example, through its MoPub acquisition, AppLovin can leverage data from other mobile gaming publishers to derive insights on KPIs like CPMs, CTRs, viewability rates, completion rates and more. Then, AppLovin can use these rich insights to improve and grow the gaming assets they already own. It’s a recipe for success – and smart companies with large budgets are doubling down.

For Microsoft, the opportunity is equally robust. It can now combine the strengths of Xandr and Activision Blizzard to give both its gaming business and its ad tech business a major boost. Moving forward, the tech giant can gather insights from Xandr’s existing ad platform and use them to drive growth and improve the monetization of Activision’s portfolio of mobile gaming content.

And that’s really just the beginning. With the mobile gaming content market in the US expected to reach $25 billion in 2022, and US mobile ad spend exceeding $160 billion this year, this particular M&A trend may very well set the tone for mobile marketing in 2022.