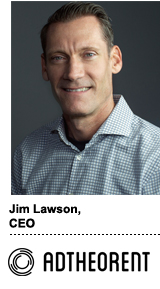 Special purpose acquisition companies have fallen out of favor. But demand-side platform AdTheorent, which went public via SPAC late last year, has no regrets about the route it took to IPO.

Being part of a SPAC is “a temporary status, a means to an end,” said AdTheorent CEO Jim Lawson. “And that end is becoming a public company, which we now are.”

The deal raised around $315 million and valued AdTheorent in the neighborhood of $1 billion. “We accomplished our objective,” Lawson said. “Although now the turbulent market is obviously not fun to watch …”

The stock has declined roughly 41% since its debut.

AdTheorent, which was founded in 2012 and has around 300 employees, started trading on the NASDAQ under the ADTH stock ticker at the end of last year. Its first earnings report hasn’t been scheduled yet – as a smaller public company, it’s not legally required to file until March – but in December, AdTheorent reiterated guidance of at least $161.6 in revenue and $106.2 in adjusted gross profit for 2021.

AdExchanger: What’s your take on the Unified ID 2.0 initiative?

JIM LAWSON: While we support the effort, it remains to be seen if the adoption and scale will be there. Actually, some of what Google is doing with FLEDGE [and Topics] and other methods for including statistical or aggregated information in the bid request rather than tying information to a specific user is more in line with how our technology operates.

We’re a programmatic DSP. We use machine learning to predict which impressions available for ad placement at any given moment are most likely to drive business outcomes for our advertiser customers, including online actions and physical world outcomes, like a store visitation or purchasing a product.

Who do you compete with most – I’m assuming Google and The Trade Desk – and how do you differentiate?

The Trade Desk, DV 360 and Viant are the main ones. We differentiate by focusing on performance. We work with a lot of independent agencies and brands directly, and we make the case for using data science and machine learning to target ads.

When you target based on a user ID, you’re by definition looking for that person.

What we’re asking is, when a conversion happens – when, for example, a credit-card application is completed on a website – which common data attributes are present more often than not? By identifying those commonalities, we can predictively score new impressions based on past conversion activity. That’s why cookies going away or IDFAs being unavailable is not really a concern for us.

Why did it make sense to go public last year?

Going public was about getting increased visibility and scaling our business. The marketing benefit alone is helpful, and we’ll also keep on expanding our sales and marketing efforts and investing in our platform and exploring ways to grow revenue faster. There’s a lot of opportunity in CTV, for example.

Wall Street re-embraced ad tech last year, but there’s also been some frothiness in the market. Is the love affair going to last or is there a rockier road ahead?

Some of the Ad Tech 1.0 companies were not adding a lot of incremental value. It was a lot of middleware. We were around during the pullback, but we didn’t suffer because we were investing in solutions to drive measurable value for advertisers.

There was a time, though, when you’d read what ad tech companies were saying on their websites and you’d get a headache, because it was hard to know what any of it meant.

So, as far as frothiness, there’s always going to be players that come in and try to take advantage of momentum and create businesses based on other people’s technology. But I don’t think it’s going to hurt the sector as long as other companies are also out there trying to provide real value.

Let’s talk about the other big trend: consolidation. Planning any M&A?

In our 10 years, we’ve never had any type of M&A activity. We’ve only grown organically from being a pure startup to a publicly traded company.

But now, as a public company, we’re interested in seeing how we can explore ways to accelerate our growth. International expansion is a focus, for example, because of the way we use data. It’s interesting to think about predictive advertising in a GDPR environment where we can use statistics to target without personal information.

We’re not rushing into anything, though.