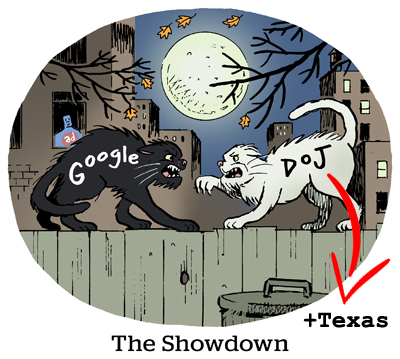 The multistate antitrust lawsuit against Google that dropped on Wednesday evening is so squarely focused on ad tech that the term “header bidding” shows up more than 110 times.

The suit details alleged anticompetitive sins related to the way in which Google runs its multibillion-dollar online advertising business, including the claim that Google colluded with Facebook to rig the digital ad market and shut out rival exchanges.

Texas Attorney General Ken Paxton, who led the investigation, summed up the case in a video posted to the Texas AG’s Twitter account, accusing Google of using its monopolistic power to control ad pricing and engage in market collusion to manipulate auctions.

Unlike last week’s state AG-led antitrust lawsuit into Facebook, the Texas suit is not a bipartisan effort. Paxton and his nine co-plaintiffs from Arkansas, Idaho, Indiana, Kentucky, Mississippi, Missouri, North Dakota, South Dakota and Utah are all Republicans.

Of those states, Texas, Arkansas, Indiana, Mississippi and Missouri have also signed on to support the Justice Department’s October antitrust complaint against Google.

And there’s also a separate lawsuit against Google, focusing on its search business, that dropped Thursday and is co-led by New York AG Letitia James – who is also spearheading the charge against Facebook’s alleged monopoly.

The Texas-led 130-page lawsuit is worth a read (click for the full-text version), but here’s a selection of some of the most notable nuggets.

The Texas lawsuit claims that when Google realized that header bidding would threaten its exchange’s ability to grab a cut on all advertising transactions – and prevent it from using non-public buy-side info to advantage its sell-side – the gloves came off.

First, Google allowed publishers using its ad server to route their inventory to more than one exchange at a time (now known as Open Bidding). But Google secretly let its own exchange win even if it didn’t submit the highest bid through an internal program named after a Star Wars character that’s redacted from the complaint for some reason.

Google also did a bunch of other stuff to try and snuff out header bidding, but that information is also redacted as well, a common enough practice given the sensitive nature of the case, said Gary Kibel, a partner at law firm Davis & Gilbert LLP.

But here’s where it gets juicy as heck.

The suit accuses Google of conspiring with Facebook to rig the ad auction in a secret agreement where Facebook agreed not to seriously support header bidding in return for Google giving Facebook information, speed and other advantages in the auctions that Google runs for app ad inventory.

Google realized that if Facebook went big on header bidding, including through Audience Network, that would result in some serious competition. In these auctions, Facebook and Google would compete head-to-head as bidders, but decide together how often and when Facebook would bid and win.

“Literally manipulating the auction,” according to the suit.

Back in 2017, after Google and Facebook allegedly struck their clandestine deal, Facebook gave AdExchanger a different reason as to why it was making Audience Network inventory available through partners rather than building its own technology.

“We’re not coming out and trying to compete in the ad tech landscape,” said David Jakubowski, who was Facebook’s director of publisher solutions at the time. Jakubowski has since left the company.

A Google spokesperson claims that the allegation of collusion is inaccurate and misrepresents the relationship between Google and Facebook, whose Audience Network is one of more than 25 companies that participate in Google’s Open Bidding program

“The idea that we’re rigging ad auctions in Facebook’s favor is nonsense,” the spokesperson said. “We don’t manipulate the auction and Facebook’s participation in Open Bidding doesn’t prevent Facebook from participating in header bidding or any other number of similar auctions.”

At the heart of the Texas-led case is the accusation that Google maintains multiple interwoven monopolies across both the buy and sell sides that together give it “extraordinary” scale in the digital advertising market. 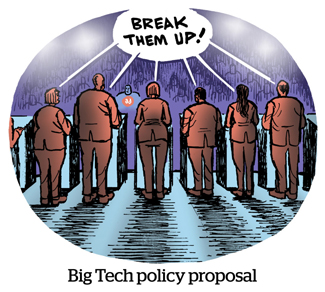 When Google bought DoubleClick in 2008, it explicitly told Congress that their customers, publishers and advertisers own the ad server data “and DoubleClick or Google cannot do anything with it.”

Google also told regulators that it couldn’t combine DoubleClick data with its own data even if it wanted to due to contractual obligations.

By 2016, Google had reneged on that promise.

“Google accesses a seller’s nonpublic data in its capacity as a seller’s broker, but then converts such data for Google’s own use,” the suit alleges. “In turn, Google lets publishers that promise to forgo header bidding to regain access to some of that data to sell ads.”

This action, according to the Texas suit, served a dual and anticompetitive purpose. It prevented a user from being easily identified in the name of privacy while allowing Google to use that same information for its own trading decisions.

At a high level, the suit claims, this encryption of publisher user IDs “forecloses competition” for inventory from non-Google exchanges and ad buying tools.

Although Google claims it cut off publisher user IDs to protect consumer privacy, the suit alleges that “Google does not protect users’ privacy when doing so harms Google.”

One example is restricting the use of user IDs by other participants in its ad tech stack while continuing to take advantage of that data to power its own products.

Another example is the planned elimination of third-party cookies in Chrome, which Google is justifying on privacy grounds, the suit says. But the actual effect of that move, the states argue, will “increase information asymmetries between Google and its competitors.”

Google is also accused of sustaining its monopoly by engaging in “tying” – a massive antitrust no-no – by making its publisher ad server contingent on the use of its ad exchange, thereby creating artificial barriers to entry in the publisher ad server market.

To sum it all up, Google’s outsize control over publisher inventory through its ad server while simultaneously operating the largest advertising exchange creates “inherent conflicts of interest” between what’s best for publishers and what’s most lucrative for Google.

Google can charge peanuts for acting as a publisher’s sell-side intermediary while turning around and earning substantially higher fees when selling that inventory through its exchange.

That dynamic, the suit says, creates a strong incentive for Google to steer inventory toward its exchange where it can extract more moolah.

“Digital ad prices have fallen over the last decade. Ad tech fees are falling too. Google’s ad tech fees are lower than the industry average,” a Google spokesperson said in a statement. “These are the hallmarks of a highly competitive industry. We will strongly defend ourselves from his baseless claims in court.”

12/18/20: Story updated to include Google’s statement on alleged auction rigging with Facebook.