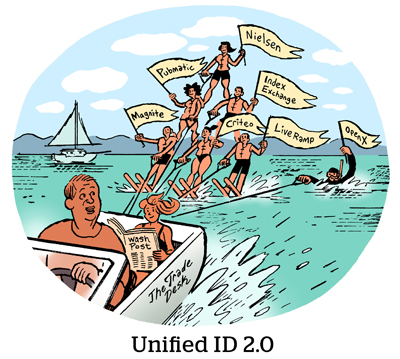 Well, here’s the most ad techy thing ever: Clean room platform InfoSum is integrating with Unified ID 2.0 to expand how advertisers can use their first-party data in the bidstream.

The integration, which went live on Thursday, makes a lot of sense.

Think of it as an additional first-party signal that can be added to a bid request via an InfoSum clean room. Advertisers onboard their CRM or email data to InfoSum as they usually would, but now they can also connect their audiences to The Trade Desk using UID2 identifiers directly from the InfoSum platform.

InfoSum will serve as a “closed operator” for Unified ID 2.0, meaning it’s one of a few entities that is authorized to use first-party data to create and encrypt UID2 identifiers. (IPG-owned Kinesso and Acxiom also signed up as closed operators for UID2 last year.)

UID2 is an open-source industry initiative, originally spearheaded by The Trade Desk, that aims to replace third-party cookies with hashed and encrypted email-based IDs.

The whole point of a clean room is to allow companies to share, match and mingle their personally identifiable information securely without having to worry about leakage or misuse.

“No attribute or behavioral data is shared … and additional protection can be applied using customizable differential privacy filters,” said Lauren Wetzel, InfoSum’s chief operating officer. “Because data never moves during this process, any ID can safely be used for matching, insights, activation and measurement without risk.”

In a clean room, first-party data is onboarded, then immediately anonymized using secure encryption techniques, after which advertisers can build custom audiences across partners.

By combining already-encrypted identifiers, like UID2 IDs, with clean room tech, like InfoSum, ad buyers get an extra level of privacy protection so they can feel more comfortable about using their first-party data.

“This is a critical win for more usage of first-party data via UID 2.0,” said Michelle Hulst, chief data officer at The Trade Desk.

Omnicom Media Group, which partnered with InfoSum last May and formally endorsed UID2 in July, is one of the first buy-side partners planning to take advantage of InfoSum’s integration with Unified ID 2.0 by bringing in client data tied to Omni ID, Omnicom’s proprietary deterministic identity solution.

Omnicom clients use Omni ID to source insights and activate them across addressable media channels.

Now, they can safely expand the reach of their first-party data directly from an InfoSum clean room using UID2 identifiers as another signal in the mix.

Marathon, not a sprint

But it hasn’t been totally smooth sailing for the Unified ID 2.0 initiative, which is still hunting for an entity to act as its independent administrator. The admin’s main job is to manage access to the UID partner ecosystem.

It’s an inherent challenge for any email-based identifier to achieve the necessary scale. Although The Trade Desk has enlisted dozens of partners so far, some remain skeptical.

As of late 2021, UID2 had been implemented on just 7,500 of around 180,000 publishers reviewed, according to data from web crawler Sincera. As of late April, the number of sites with UID2 implemented was still under 10,000, based on Sincera’s calculations.

But Unified ID 2.0 “is a marathon, not a sprint,” said The Trade Desk’s Hulst, who noted that “another handful of publishers” went live with UID2 over the past couple of weeks.

“We continue to scale the ID as more partners adopt and build the infrastructure,” Hulst said. “Interoperability with other IDs is also key to maximizing coverage, and that’s why we have partners like LiveRamp and others to build a strong ecosystem of identifiers.”

In late 2020, LiveRamp partnered with The Trade Desk to make UID2 accessible to publishers through its Authenticated Traffic Solution (ATS). In early March, LiveRamp and The Trade Desk announced another joint effort, this one to develop a UK- and Europe-specific version of UID2 based on ATS that won’t (in theory) stumble over the GDPR trip wire.