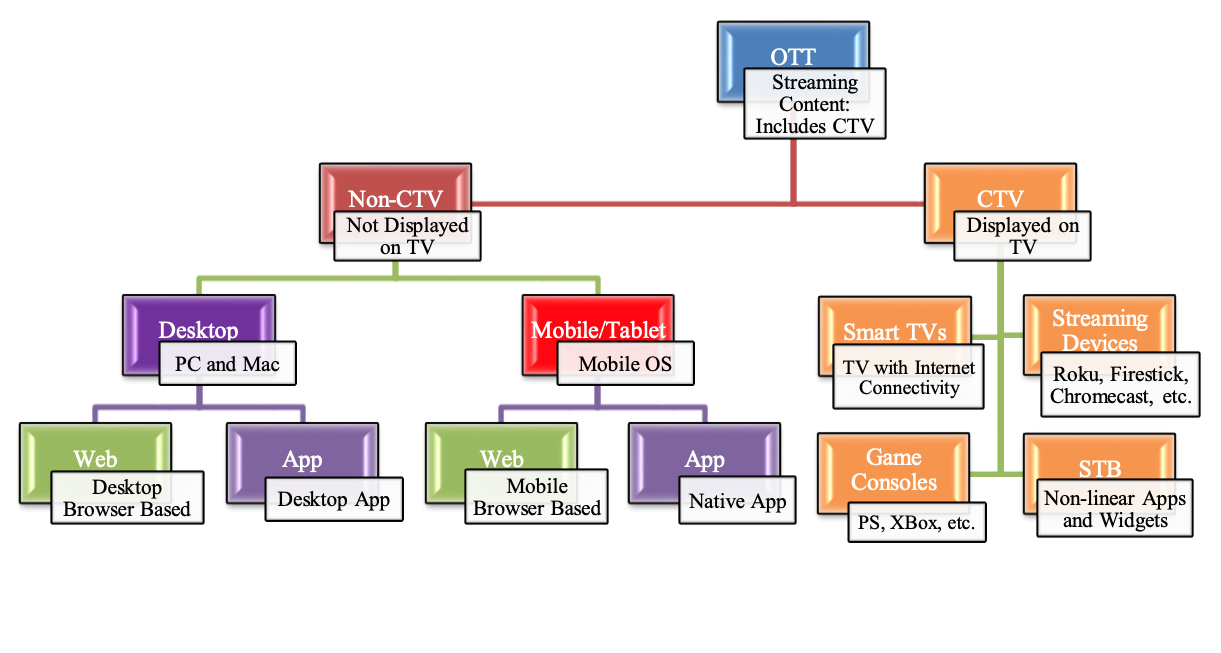 The Media Rating Council (MRC) may have stripped Nielsen of its National and Local TV accreditation last week, but it also made another significant announcement: It is now defining over-the-top as connected TV.

The MRC issued final measurement guidelines on August 30 for CTV. The guidelines, first established with the IAB in 2018 in order to distinguish linear from streaming, also include new guidelines for digital video ads using server-side ad insertion, which has been a target for ad fraud.

The MRC, which wields its power by accrediting audience measurement services used by buyers and sellers, renamed what it defines as OTT to use the prevailing industry term “CTV.”

The definition, however, remains the same: digital video that’s displayed on TV screens via internet-connected devices such as Roku or Amazon Fire, smart TVs and apps. It includes set-top boxes that receive signals from ad servers as well as USB and HDMI multimedia devices, connected TVs and gaming consoles.

“What happened was, people started calling what we called OTT, CTV,” said Ron Pinelli Jr., the MRC’s SVP of digital research and standards. “We’re going to rebrand that as CTV and align that with the industry. [The digital video] had to be displayed to the TV – that was a key piece.”

OTT isn’t completely going away, however. The term will now be used more broadly to define digital video content delivered across desktop, mobile and other devices. Essentially, all digital video delivered to a TV screen is now considered CTV, even though it’s included under the broader OTT umbrella.

But: “If you watch Netflix or Hulu on your mobile device, that’s OTT,” Pinelli said.

The “clearer guidelines are going to make it easier for us as an industry to transact because we know what we’re buying,” said Christiana Cacciapuoti, SVP of marketing and innovation at MadHive, blockchain-based TV ad tech company.

Though the MRC said that while CTV needs to be “independently considered” as part of its accreditation process, Pinelli said that distinction is important because measurement in CTV is largely pixel-based, making measurement more challenging than mobile or desktop. Traditional measurement tools such as JavaScript and SDKs are either lacking or limited in the CTV space.

Plus, CTV is a different environment where there’s often co-viewing, which requires a different measurement approach, Pinelli said. “It would be dangerous if there were no distinction” between an ad served on a TV and an ad served to a phone or computer, he added.

In a fragmented streaming landscape, collaboration and passing of signals is critical for measurement. But that just isn’t happening yet. A big problem in the industry is a lack of cooperation, Pinelli said. Measurement vendors are not receiving the signals they need to determine if a TV is running ads while the screen is off, for example. In turn, those blind spots have made accreditation challenging. “We were auditing them saying you need to have good coverage of video inventory, and they were saying, ‘We can’t – we’re not getting the video signals we need,’” he recalled.

The MRC called for more integrations between server-side ad insertion (SSAI) providers – which include companies like Verizon, FreeWheel and Google – and vendors in order to facilitate client-side measurement. SSAI is prevalent in CTV and enables seamless playback on devices, such as Roku, Apple TV and Fire TV, by combining content and ads into a single video stream.

Bad actors often falsely identify themselves as SSAI vendors and trick advertisers into paying for ads that are never actually seen.

Conversely, because much of the SSAI traffic flows through a single server, measurement providers were also mistakenly classifying legitimate ad requests as invalid traffic (IVT), the MRC said.

“We gave guidance on how to measure this better and encourage cooperation between both the sellers and vendors to try pass these signals so that they’re not erroneously labeled as IVT,” Pinelli said.

The MRC also called for a standardized approach to improve measurement vendors’ ability to detect inactive sessions or continuous play sessions. During sessions where content that continues to play and run ads while users aren’t active, the MRC encouraged SSAI providers to consistently pass these types of signals to vendors.

The MRC also called on vendors to identify signals indicating when a CTV device such as Roku might be on, but the TV is off. The MRC said any ad impressions served in this scenario should not be counted and reported separately.

The MRC voiced its support for the IAB Tech Lab’s solutions to some of these measurement problems. It encouraged the industry to adopt solutions being developed by the IAB Tech Lab, such as ads.cert, VAST 4.0 and the Open Measurement SDK for CTV. Together, these technological standards will improve measurement, increase transparency and reduce fraud.

There are still areas that the MRC needs to address, such as video player-ad interface definition (VPAID) – an interface between video players and ad units – not being “universally supported” for measurement across digital devices, as well as the need for advertisers to have a full view of audiences and frequency capping controls, said Jack Smith, chief product officer of ad verification company DoubleVerify.

And the MRC still hasn’t gotten to the root of the measurement issue – identity. “It’s good to see the paths for ad distribution in OTT fully documented for reference,” one network executive, who declined to be identified, said of the updated definitions. “Unfortunately, the [measurement] issues across the various environments are really tied to the identity solutions – desktop, mobile, CTV – and those have yet to be fully addressed by an MRC framework.”

Working toward common definitions of CTV, however, is a welcome first step, said Shailin Dhar, CEO and founder of ad verification and measurement company Method Media Intelligence. “We are glad to see the MRC taking the steps to help create the standards used for connected television as the standards around TV in general have evolved and become more important as spend has grown and shifted to streaming.”