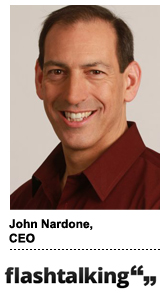 Independent global ad server Flashtalking said on Tuesday that it has acquired Israeli-based ad fraud detection specialist Protected Media as it makes a bigger push into the OTT space.

Terms of the deal were not disclosed, but the acquisition was made with a mix of cash and stock.

“CTV is such a hot space right now and has a lot of unique challenges that Protected Media’s technology can really address,” Flashtalking CEO John Nardone told AdExchanger. “We’re really excited to bring integrated data through the verification service into our integrated data products, a simplified workflow and now really deepening our capabilities in CTV.”

Protected Media’s 17 employees will join Flashtalking, and the company is also hiring seven new verification specialists. The integration process will take place over the next six months.

“Before you buy the media you’ve got to have the creative, and after you have to measure it,” Nardone said.

Until now, though, Flashtalking did not help evaluate inventory quality, and the ad server’s clients found it cumbersome to integrate various verification partners.

Talks with Protected Media began in 2019, but Nardone said the acquisition took on added significance last year with the shift to streaming during the COVID-19 pandemic.

“This reinforces for the industry that Flashtalking is playing big in the OTT space and is investing and bringing unique capabilities to the table that other folks don’t have, and it’s part of a long-term strategy to win in that space,” he said.

The OTT boom has created more opportunities for fraudsters, particularly large-scale “spoofing” attacks, in which scammers use server-side ad insertion to generate fake CTV inventory across a large number of apps, IPs and devices, which can cost advertisers and publishers millions in ad spend.

“We’ve seen good publishers get completely thrown off platforms, get blacklisted for things which have nothing to do with them,” said Asaf Greiner, CEO and founder of Protected. He added that Protected Media is working with publishers to help clear their names with groups that have accused them of fraudulent activities.

Protected Media will also help Flashtalking to accelerate the set-up and management of verification processes, since it’s an automated tool and doesn’t rely on error-prone shared spreadsheets.

Flashtalking had already been investing in its OTT and CTV partnerships and platform integrations with other verification partners, including DoubleVerify and Oracle Moat, and Nardone said Flashtalking will continue working with them.

“Flashtalking can ensure that clients will never have to doubt the quality of their impressions, especially expensive, high-value OTT/CTV impressions,” he said.

Last year, Protected Media uncovered an ad fraud scheme dubbed Hydra that stole millions from advertisers by impersonating app traffic. The company worked with Google and the Trustworthy Accountability Group to shut the scam down.

But it’s an ongoing process.

“At the end of the day, the takedowns of most of the attacks are not very useful, because you take down the attack but you don’t take down the attackers – their organization is still there,” Greiner said. “If you remove one of their methods, they’ll return with a new one. What is important for us is not the specific takedown – it’s providing the industry and the advertisers with tools to cooperate with one another and deal with the attacks as they materialize.”

An earlier version of this story included a quote stating incorrectly that Protected Media is the only company to receive MRC accreditation for OTT fraud detection. In fact, Double Verify received accreditation in January.