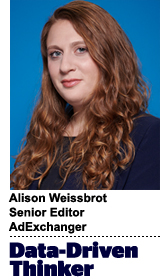 Today’s column is written by Alison Weissbrot, senior editor at AdExchanger. It’s part of a series of perspectives from AdExchanger’s editorial team.

Facebook’s director of product management Rob Leathern tweeted Thursday that the social media giant would ban ads and commerce listings on its platform for hand sanitizer, disinfecting wipes and COVID-19 test kits to stop the spread of misinformation during the coronavirus outbreak.

Two weeks before, the company said it would place a temporary ban on ads and commerce listings for medical face masks.

But if Facebook can remove misinformation related to coronavirus, why isn’t it using its technology and capabilities to remove all misinformation – especially the political kind that flourishes on its platform under the veneer of free speech?

Removing coronavirus misinformation is the right thing to do – but it’s also an easy win. Unlike the political realm, where Facebook must walk a fine line between appearing neutral while maintaining its good graces with powerful figures and the government, no one is going to fault Facebook for stepping up during a crisis.

This take might be cynical, but Facebook’s calculated decisions over what counts as misinformation since 2016’s Cambridge Analytica scandal show that good press and political standing is just as important to the company as the health of its platform and the safety of its users.

Yes, Facebook is stepping up and using its powerful machine to remove misleading content during a global pandemic. But politicians can still lie on Facebook – not directly about information related to coronavirus, but about their own political motives in a time of crisis – without being flagged for it. And on Facebook, that misinformation spreads just as fast as a virus.

Facebook’s stance on moderating political ads has been uncompromising from the beginning, with CEO Mark Zuckerberg standing behind the First Amendment as an excuse not to pull down any political content with proven false information. Just look at the doctored video of Nancy Pelosi that made her appear drunk and circulated widely on the social network last year. Facebook’s fact-checkers confirmed the video was fake, but leadership still allowed it to remain on the platform.

While it’s extremely difficult to remove billions of pieces of content every millisecond from a platform used by billions of people daily, if Facebook can fight back against false content related to COVID-19, it seems like it could also implement a simple fact-checking flag on political speech, or at least step up its efforts to control how powerful people manipulate the platform – and its users – for their own political gain.

Facebook is by no means the only big tech giant with a huge role to play and lesson to learn from this crisis. It took a global pandemic, after all, for Amazon to step up its removal of price gougers and Google to more strenuously de-monetize misinformation on YouTube.

Big tech has a big role to play in fighting misinformation, and not just during times of crisis. Facebook and all of the other big platforms must do the right thing for the public interest – not just what’s right for their image or bottom line.