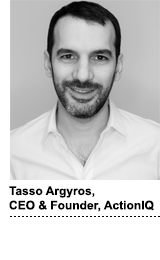 But marketers often underestimate how much their customers care about privacy, says Tasso Argyros, CEO and founder of customer data platform ActionIQ, on this week’s episode of AdExchanger Talks.

The majority of consumers (55%) say data protection is “very important” to the customer experience, and nearly half (48%) say the same about privacy, according to a recent survey conducted by ActionIQ looking into the state of customer experience.

What’s particularly interesting about the data privacy issue, Argyros says, is how consumer perception can change depending on the scenario.

Consumers don’t like their data “changing hands under the table,” he says. But “at the opposite end, if a consumer offers some information or data to a brand, the expectation is almost 180 degrees; they expect the brand to know and remember them.”

Marketers sometimes don’t recognize that delta, and it’s to their detriment.

For example, Argyros has a young daughter named Athena. If he were to tell someone her name and later that person thoughtfully remembered to ask after her, that’s just fine. But if a stranger with no obvious way of knowing her name were to ask, “How’s Athena doing?” alarm bells would go off.

“Exactly the same statement, which is a form of personalization, can be perceived as extremely impressive and engaging or very creepy,” Argyros said. “The difference is, did I offer that data to you?”

Also in this episode: A brief Greek language lesson, why it’s good to get RFPs from marketers even if they aren’t quite ready to sign on as a client just yet – and a few strong words for the technology analyst community, which Argyros argues hasn’t done the best job of defining the CDP market for advertisers.