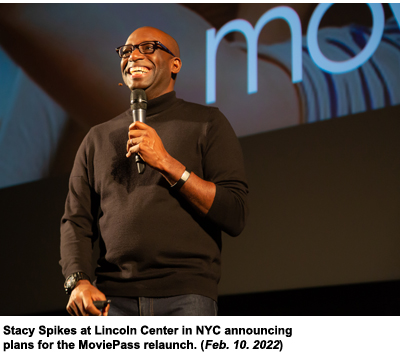 For many, the rise and fall of movie ticket subscription service MoviePass became a cautionary tale about the perils of growing too quickly.

After being acquired by Helios and Matheson Analytics in 2017, the company’s new ownership pushed an unsustainable model – including, at one point, unlimited movie tickets for $10 a month – until it all came crashing down roughly two years later. MoviePass filed for bankruptcy in 2019.

But its story isn’t over. MoviePass is coming back with original co-founder Stacy Spikes as CEO – and this time there’s going to be an advertising component.

Spikes had been pushed out as CEO of MoviePass by Helios in 2018 after objecting to its growth-at-all-costs mentality. Last year, though, he acquired MoviePass out of bankruptcy with plans to relaunch this summer.

“A lot of digital advertising is not even seen,” Spikes says. “It’s up to the consumer to do what they want … [but] if the advertiser knows that you watched something, they’re willing to pay a higher ad rate than if they have no idea.”

Also in this episode: The ongoing challenge of raising capital as a Black entrepreneur; what it’s like to work with theater chains now that COVID – and streaming – have changed the moviegoing experience; and the film that made Spikes realize working in the movie industry was his destiny.