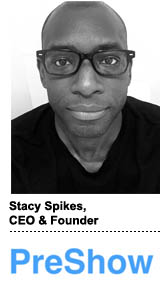 If there’s one thing that Stacy Spikes, co-founder and former CEO of MoviePass, learned from his experience at the ill-fated movie ticket subscription service, it’s to trust his gut.

“If something doesn’t feel right, don’t do it,” said Spikes. He exited MoviePass in 2017 when Helios & Matheson Analytics, a publicly traded information services company, bought a majority stake in it.

When Helios lowered the price of a MoviePass subscription, membership soared … but it was only a matter of time before the cost of maintaining such a service – one that allowed theatergoers to see as many movies as they wanted for one set price – was no longer sustainable.

Plagued by financial woes, MoviePass shut down in 2019. “Along the way, we kept going with certain decisions with certain people that didn’t feel right,” Spikes said. “These days, I follow my instincts.”

The idea for his new startup, PreShow, came from Spikes following that entrepreneurial intuition. PreShow, in beta and slated to launch later this year, is an app that rewards gamers with prizes – including movie tickets – in exchange for watching long-form video content.

“The pain point for advertisers – and consumers – has been that no one really knew how to package attention,” Spikes said. “And that is exactly what we’re aiming to do.”

AdExchanger: How did your MoviePass experience shape you as a businessperson?

STACY SPIKES: There was good and there was some bad. There was a point before the exit when we were valued at half a billion dollars. I remember standing outside Regal Union Square on a Saturday and watching person after person walk up to the kiosk with their red MoviePass card. That was the moment I realized that we’d built something consumers really loved – and if it had been managed properly, it could have been a very big company.

But it’s also a sad truth that certain doors are still closed to minorities in ways you don’t want to believe. Only between 1% and 3% of people of color and women have access to capital, and that is how I lost MoviePass. It’s a learning experience that I took with me.

What makes PreShow different from rewarded video, which is a model that’s been around for a long time?

Businesses exist that allow people to watch a video and get a reward downstream. But we’re focused on longer-form branded content, not 30 or 60-second spots.

We can’t share advertiser names yet, and we’re still smoothing out the experience, but say there’s a branded product placement like Audi in Marvel’s “The Avengers.” The studio wants people to buy a movie ticket and the car brand wants exposure.

Our idea is to help close the loop by allowing consumers to pick what they want to see and allow a brand to sponsor that viewing directly. It’s a throwback to the early days of media where content was brought to you by a sponsor, but in this case we can deliver 100% guaranteed views.

What is a person’s attention worth?

The short answer is, we’re testing it out. There is a big range depending on what you’re looking at. In the focus group world, a person’s attention can be valued as high as $100 an hour, while a YouTube TrueView is about 30 cents for 30 seconds.

Ballpark, we’re thinking that half an hour will get you somewhere in the $7 to $10 range. But sometimes advertisers will have their own reward and they can figure out their own economics.

Say a movie studio is spending $X million in ad dollars side by side with a promotional partner. Some of those ad dollars can be put aside for a PreShow at whatever value they decide. Or you could have a brand like Heineken, for example, that might offer free passes to the US open – which normally could cost $200 – because they have empty seats in the middle of the day and they want to pack it.

The price point is variable. I see this developing into an almost Amazon-like marketplace for attention where participants will start to set their own prices.

How does PreShow make money?

Rather than a CPM or cost per action or cost per install, we charge by what we call CPX – cost per experience. And brands will only pay for 100% in-view completed views.

What sort of data will PreShow collect from viewers?

Nielsen takes a sample and then applies it across the universe of an entire test. Our plan is to allow brands to ask questions of viewers directly one-to-one.

A brand can show a viewer two pieces of creative, for instance, ask which they like best and then we can say, “Men over 34 located in this or that part of the country prefer this creative.” Brands can also include calls to action as in, “Hey, that new Dodge Charger you saw in Fast and Furious – do you want to take it for a test drive?”

Why is now the right time to launch something like this? People have been trying to quantify the attention economy for years.

Digital media isn’t the holy grail it was meant to be and people don’t have control over their data. Ad blocking and subscription models are squeezing out advertising. And there’s no great way to truly confirm whether someone has actually watched something.

We want to put the power back into the consumer’s hands in a transparent way so they can make a choice about how they want to subsidize their life.

Because content isn’t free. It’s a bit like Morpheus in “The Matrix.” Take the blue pill and your data will be sold; take the red pill and you can be awake and make your own decisions.

But if you want stuff without spending money, then it has to be ad-supported in some way.