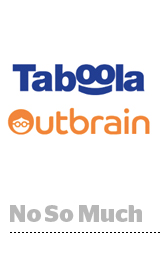 Updated 10/22/20: According to Taboola, the Fox News and News Corp relationships ended amicably and for reasons unrelated to the rev share model changes.